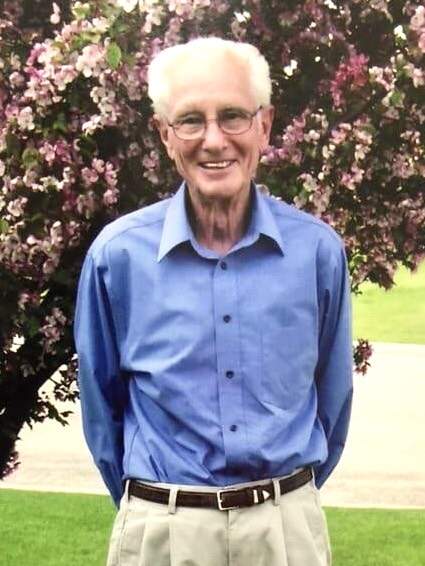 Friends may call 5:00 – 7:00 PM Sunday at David-Donehower Funeral Home.  There will be a Knights of Columbus Rosary at 6:30 PM followed by a parish vigil at 7:00 PM.  The visitation will continue at the church 1 hour prior to the Mass on Monday.

Walter Henry Welle was born February 17, 1931 in Spring Hill, Minnesota to Michael and Adella (Meyer) Welle.  He was raised and educated in Spring Hill.  He served with the U. S. Army in the intelligence service.  Following his discharge, he returned to Spring Hill where he married Lillian Lieser, August 30, 1956.  They lived in St. Cloud while Walt attended the St. Cloud School of Business.  They moved to Callaway, MN in 1958 where Walt served as Business Manager for Tomlinson Lumber Company until 1983.  He then sold insurance for Catholic Aid Insurance and worked as a funeral attendant for David-Donehower Funeral Home.  He retired in 1996.

Walt was a member of the Callaway Lions Club, the Callaway Fire Department, Callaway City Council,  Holy Rosary Council 3166, Knights of Columbus and was a Eucharistic Minister.  He spent many years as a dedicated volunteer and, in 2014, was named the Outstanding Becker County Senior Citizen.

Walt enjoyed telling a good joke, playing cards, hunting and spending time with family and friends.  His love of music was evident whenever he was dancing a polka or singing a hymn.  One of his favorite past times was spending time at the cabin frilling, playing horseshoes and cards and watching his family together.  He had a deep faith and willingly answered the call to serve others.

To order memorial trees or send flowers to the family in memory of Walter Welle, please visit our flower store.