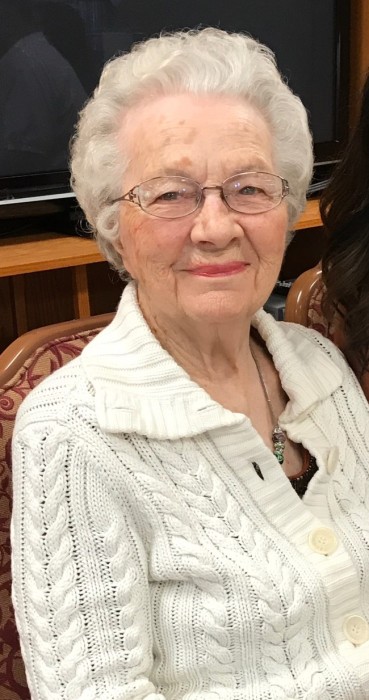 Vivian Emogene (Silovich) Lee, age 90, of Audubon, MN passed away at Ecumen, The Cottages Assisted Living, in Detroit Lakes, MN, on Sunday, June 3, 2018, under the care of the Hospice of the Red River Valley.

A Celebration of Life Mass will be held at 11:00 am on Monday, June 25, 2018,  at Holy Rosary Catholic Church in Detroit Lakes.  Immediately following the mass, in honor of the years Vivian served others by cooking in Holy Rosary’s kitchen, lunch will be provided for friends and family to connect and celebrate the time they had on this earth with her.

Vivian was born August 18, 1927, in Westport, MN, to Clair and Verna Barker.  She grew up and attended school in Glenwood, MN and graduated in 1946. The following is an excerpt of Vivian’s auto-biography, penned in her own words: “While Mom owned a restaurant on Lake Reno, money was tight back then and often times Mom didn’t have enough money to buy us shoes.  However, next to her café was a clothing store owned by Mr. Shaefer.  He directed mom to go and pick out clothes and shoes for all of the kids.   While I was the first one in the Barker family to graduate from High School there was no money for me to go onto college, even though I really wanted to.

When I was 18 years old, I got a bus ticket to Minneapolis, without any housing lined up.  It was a mighty big place for a country girl!  The bus driver suggested to look into a local girl’s dormitory as it was close to the depot.  I got a small apartment but was very lonesome.  I saw in the paper there was a hockey tournament just down the street from our dorm.  I took my little red chair and sat on the edge of the pond to watch the contest.  Afterwards, this big, handsome young man came up the hill to the rink.  As we talked, he invited me to get a bite to eat.  The man introduced himself as Joe Silovich, from Eveleth, MN.

On Sundays, I was used to going to church, but there were none close by.  However, they had an Evangelist speaker coming that day to preach at the Borean Baptist Church. Out of curiosity, I went to this outdoor rally and the speaker was a minister by the name of Billy Graham. Oh was he ever good!  When he was done speaking he invited everyone to come forward to accept Christ as their Lord and Savior.  I went forward and I must add, that I have had a beautiful life ever since for which I’m thankful.  I married the love of my life in 1947 at the Holy Family Catholic Church in Eveleth, MN, and we had 4 children.”

Over the next several years, Vivian, Joe, and the kids made their life in Grand Forks, ND; Sioux City & Odebolt, IA; Thurston, NE; Hatton, ND; and finally Audubon, MN.  While in Grand Forks, Joe played hockey at UND on the same team as Ralph Englestad. After Joe and Vivian separated, Vivian married Roland Lee in 1987.  They made their home in Audubon, MN until 2012 when they moved into Ecumen in Detroit Lakes.

The entire time, Vivian lovingly served her God, her church, her family, and her community. Vivian’s mantra was “We are put on this earth to serve one another”.  Her service was evident through the many organizations that she participated in and supported; including: The Boys and Girls club of Detroit Lakes, women’s church circles, the VFW Women’s Auxiliary, and a Vietnamese family whom she mentored and took under her wing ensuring they had proper housing, food, clothing, and especially shoes.  Yet, those that had the privilege of connecting with her one on one learned first-hand of her passion of healing through reflexology and her love of cooking & baking (especially Potica bread!).  In rare moments of downtime, Vivian enjoyed decorating her home; Christmas was her favorite hence the 100’s of Hallmark ornaments and multiple trees.  In addition, she loved gardening.  Some of her favorite plants were hostas and hydrangeas.  She loved to can and freeze strawberries, raspberries, peaches, and made the sourest dill pickles in all of Becker County.  Vivian also loved to dance to polka music and sing hymns.

Vivian’s family would like to extend a heart-felt thank you for the loving care provided by the staff at Ecumen-Emmanuel, The Cottages, the Hospice nurses, and her care-giver, Charles Korinta (who befriended Vivian after they both won Detroit Lake’s Sr. Citizen of the Year award in 2012).  Cards may be sent in Vivian’s name in care of Donehower Funeral Home in Detroit Lakes, MN.

To order memorial trees or send flowers to the family in memory of Vivian Lee, please visit our flower store.