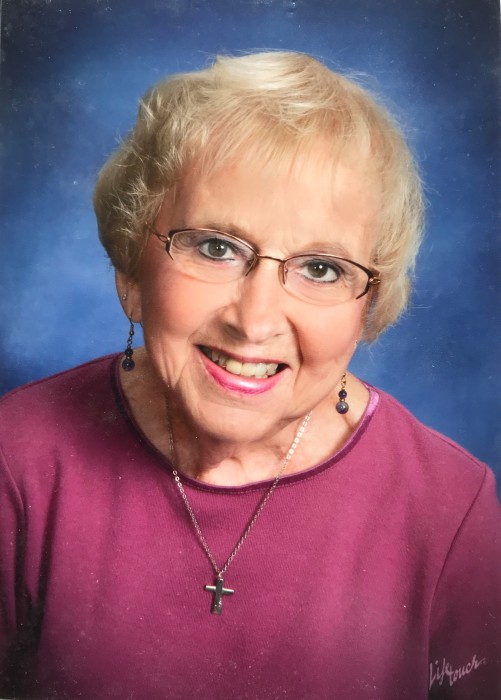 Vivian H. Knutson, 89, of Detroit Lakes, MN and Mesa, AZ passed away on Dec. 3rd, 2018 at the Emmanuel Nursing Home in Detroit Lakes. Vivian was born in St. Cloud, MN to Adolf and Emma (Johnson) Leseman. She was raised in Pine River and graduated from Pine River High School in 1947. In June of that same year, she married her sweetheart Robert (Bob) Knutson at the First Lutheran Church in Pine River, MN. He was a WW2 Navy Veteran who, among other things, bravely fought in the battle of Leyte Gulf. They were married for 65 years until his death in 2012. Vivian was an employee of Northwestern Bell Telephone Co in Detroit Lakes as well as in Bismark, ND where she and Bob resided from 1971 to 1993, when they moved back to Detroit Lakes. She enjoyed her work at the telephone company and had many lifelong friends from those years. She retired in 1987, at which time she and Bob began spending their winters in Mesa, AZ at Silveridge, a retirement community they loved, and returned each summer to Detroit Lakes to be close to family and dear friends from their early years there. After Bob passed away, she moved to Mesa full time from 2013 - 2016. She was a great cook and enjoyed entertaining, and loved meeting new people. Sewing was another pastime pleasure of hers. Her true love was dancing, which she never tired of - from ball room to line dancing - she did it well.

Vivian will be greatly missed by her children: daughter Cindy (Scott) Crain of Captain Cook, HI: son Jim (Deb) of Detroit Lakes MN; grandson Kris (Su) and great grandson Alex, all of Moorhead, MN and grandson Nathan (Cara) of Estero, FL. She was preceded in death by her husband Robert; her brother Vernon Leseman of Sacramento, CA; and sister Lorraine (Leseman) Cangro of Visalia, CA.

Vivian's children are very grateful and would like to commend the excellent care she received for the last year and a half of life, where she was a resident of the Emmanuel Nursing Home of Detroit Lakes, MN. She was also attended to by Hospice of Red River Valley. They all were exceptional in their duties, filling her last year and a half with comfort and loving care.

To order memorial trees or send flowers to the family in memory of Vivian Knutson, please visit our flower store.