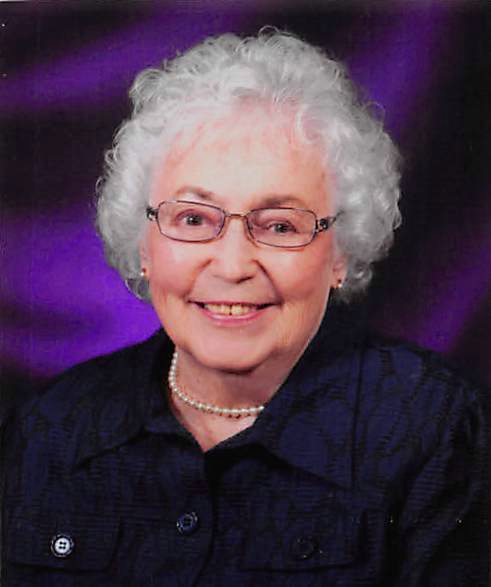 Ruby Amanda (Gramm) Renner, 94, Detroit Lakes, MN, went to be with her Lord, Friday, November 23, 2018 at Essentia Oak Crossing.  Funeral services will be 11:00 AM, Tuesday, November 27, 2018 at the United Methodist Church, Reverend Brenda North, officiating.  Interment will be in Oak Grove Cemetery.

Friends may call 1 hour prior to the service at the church on Tuesday.

Ruby Amanda Renner was born August 25, 1924 in Denhoff, ND to Gustav and Charlotte (Seibel) Gramm.  She grew up and attended school in Denhoff, graduating valedictorian (in a class of 7) in 1942.  She went on to attend Chillicothe Business College in Missouri where she trained to be a stenographer.  After traveling to jobs in Minneapolis, California and Seattle, Washington, she moved back to McClusky, ND in 1946 to be nearer to family.  She met a returning sailor, Clarence “Jack” Renner.  They were united in marriage Easter Sunday, 1948 and immediately moved to Madison, SD where Jack had a job as a printer and Ruby got a job in a doctor’s office.  They later moved to Waukesha, WI and, in 1951, to Detroit Lakes, MN.  Ruby worked for Reed and Wackman Lumber Company which later became Stenerson Lumber.  In 1977 she took a job as a library assistant in the new junior high library.  She retired in 1987.

Ruby was an avid reader and was a member of the library club.  She enjoyed bowling, camping, fishing and handicrafts as well as spending time with her family and friends.    She was an excellent cook (especially her roast beef Sunday dinners for the family).

She was preceded in death by her husband, Jack, her parents, three brothers: Edward, Carl and Robert.

Please click here to view the video tribute
To order memorial trees or send flowers to the family in memory of Ruby Renner, please visit our flower store.
Open