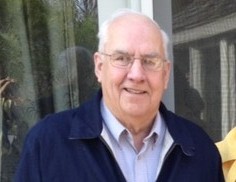 Memorial Services will be held Saturday, June 22 at 11AM in Lake Eunice Evangelical Free Church, rural Detroit Lakes.  Visitation will be held one hour prior to services.

Roger was born December 23, 1932 in Halstad, MN to Russell and Hazel (Carlson) Viker.   He attended Hendrum Public School.  After school he worked on his uncle’s farm as a hired hand.   Roger was drafted into the United States Army and was stationed at Ft. Lewis, WA.  Upon his honorable discharge in 1955, Roger returned home.  On December 31, 1955, Roger was united in marriage to Joy Sargent in Ada, MN. They welcomed two children, Steven in 1957 and Melissa in 1964.   Roger worked as a farmer early on in his career and continued until 1987.   They owned and operated the John Deere Implement in Mahnomen through the 90’s.  After selling their Implement dealership, Roger needed to keep busy.  He and a business partner started to speculate in business and land development around the lakes area.   Roger enjoyed woodworking in his spare time and built many items over the years.  He was always looking for new creative ideas that involved wood and crafted items which included wooden pens, furniture, and small tables.   Most recently he built a bee hive apiary for his granddaughter Tori.   Roger enjoyed his daily coffee visits with his friends.   Roger was a devoted husband, loving father and an incredible grandfather and will be dearly missed.

He is preceded in death by his parents, one brother and one sister-in-law: Loren (Ethel) Viker.

To order memorial trees or send flowers to the family in memory of Roger Viker, please visit our flower store.