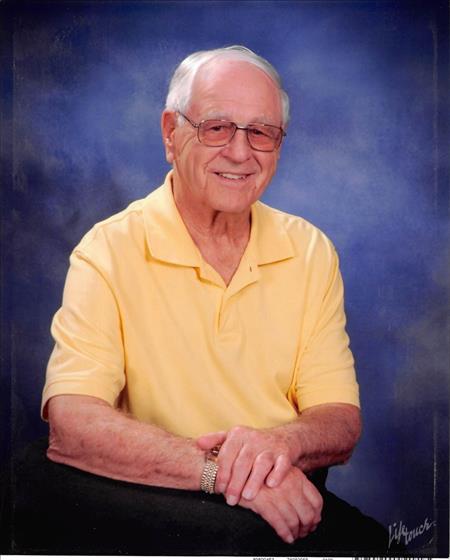 Robert "Bob" Milton Woodard (Sla), age 90, of Detroit Lakes, died peacefully sleeping in his favorite chair at his home on Wednesday, May 3, 2017. A funeral service will be at 11:00 am on Monday, May 8, 2017, at Zion Lutheran Church in Detroit Lakes, with a time of gathering one hour prior. A visitation will be from 4:00 pm to 7:00 pm on Sunday, May 7, 2017, at David Donehower Funeral Home in Detroit Lakes, with a prayer service at 6:30 pm. The burial will take place following the funeral service at Bethlehem Lutheran Church Cemetery in Frazee. Bob was born on April 13, 1927, to Milton and Jesse Marie (Stacey) Woodard in Frazee. He graduated from Frazee High School and went on to train as an electrician in Detroit Lakes. In his career, he worked for Ratz Electric, Mark's Electric, Perry Windel's, and Jack Lillis, until completely retiring at the age of 80. He was married to Eleanora Beck "Becky" on August 14, 1948, and together they raised three daughters. He loved sports of all kinds, especially Minnesota Twins baseball, and Vikings, Laker's, and Bison football. He played baseball for Frazee and Detroit Lakes and then softball for many years. He enjoyed golfing, fishing, and playing cards with his family and many friends. He was a fan of western movies and often quoted John Wayne movies. He loved spending time with his grandchildren and great-grandchildren, he loved the noise and the excitement. He enjoyed attending his grandchildren's sporting events, and was their biggest fan. Bob was especially blessed to have recently celebrated his 90th birthday with his entire family present. He was a charming soul who could strike up a conversation with anybody anywhere, and often did. He is survived by his daughters, Carol (Ronald) Gothberg of West Fargo, ND, Karla (Butch) Brogren of Detroit Lakes, and Kimberly (Tony) Matter of Hawley; two brothers, Pete (Mary) Woodard of Frazee, and Neil Woodard of Frazee; grandchildren: Derrick, Denise, Shaun, Jason, Corey, and Kristi; 15 great-grandchildren (soon to be 16); and numerous nieces and nephews. He is preceded in death by his wife of 63 years, Becky; and his parents, Milton and Marie.

To order memorial trees or send flowers to the family in memory of Robert Woodard, please visit our flower store.