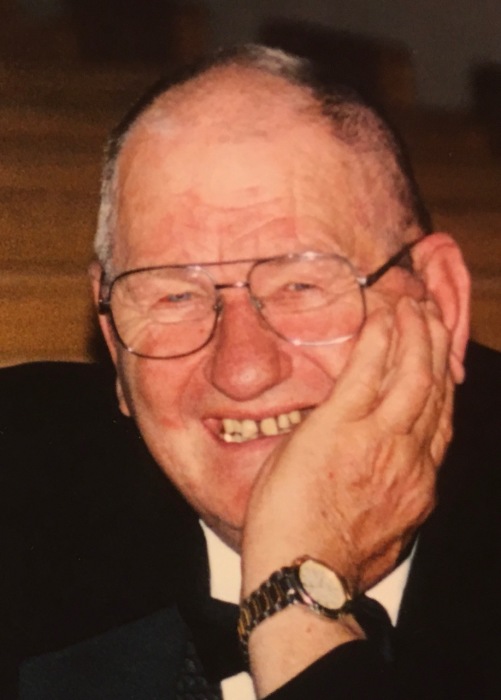 Robert “Bob” Roger Sonnenberg, 87, died in his home on December 4th, 2019, surrounded by his loving family. Robert was born September 30, 1932 in Vergas, MN to Albert Sonnenberg and Hertha (Strelau) Sonnenberg.

Bob graduated from Frazee High School.  Following graduation, he served with the US Army in Chicago, Illinois.  He married Janice Hanebuth Sonnenberg on June 5, 1952.  They made their home in Detroit Lakes, MN.

Bob served on the Becker County Agricultural Association and was a Director for nearly 40 years serving as Fair Manager or President for 30 years.  He was awarded MN Fair Person of the year in 1995 and Becker County Fair “Fair Builder” in 2017.  He received Becker County Outstanding Senior Citizen Award in 2013.   Bob was very passionate about 4-H kids, serving as 4-H Leader, and continuing the tradition of the County Fair.

Bob and Janice enjoyed gardening, selling pumpkins and produce to the Lakes Area.  He was known for his humor and often commented that his initials “B.S.” were appropriate.

He is preceded in death by his parents and brother, Ronald Sonnenberg.

A service of remembrance will be held on Sunday, December 8th at 6:00 pm with a prayer service at 7:30 pm at David Donehower Funeral Home.  A funeral service will be held Monday, December 9th at 11am at Zion Lutheran Church in Detroit Lakes, MN.  Internment will be at Oak Grove Cemetery following the service.  The David-Donehower Funeral Home is caring for Bob and his family.

To order memorial trees or send flowers to the family in memory of Robert Sonnenberg, please visit our flower store.