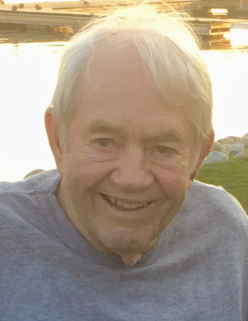 Robert (Bob) Mathew Noyes 94 of Detroit Lakes, MN went home to his wife and the Lord on January 1, 2022, after a brief illness in the hospital.  He resided at Oak Crossing in Detroit Lakes where he received excellent care.  He loved to tease the nurses and staff!  He always had a smile on his face.

Bob was born June 1, 1927, in Little Falls, MN to Chester and Genevieve (Raster) Noyes.  He attended school in Little Falls.  After graduating he enlisted in the United States Navy in May of 1945 and served on the US3 Holland ship in Hawaii.  He was honorably discharged in 1946 and returned to Little Falls and started working for NW Bell Telephone company as a lineman, after company schooling became an engineer.  He met Ramona Pung while she was in nursing school in Little Falls and were united in marriage on August 18, 1951.  A marriage that lasted 70 years.  They moved to various cities in Minnesota because of his work and finally settled down in Detroit Lakes and resided on Floyd Lake for 50 years.  After retirement they spent winters 1st in Oregon and then Arizona.  In his last years he made his home at Lincoln Park and Oak Crossing.

Bob loved the lake and fishing was his passion.  He fished many lakes in the summer and loved to ice fish in the winter.  He was the 1st person on the ice when the lake froze and if he found it safe others followed.  He enjoyed camping and fishing in Canada, too.  He had a hunting shack on Cox Lake which was where he also enjoyed spending time with friends and family.  You could usually find him working in his yard or the vegetable garden at their home on Floyd Lake.  He grew everything!

Bob also delivered Meals on Wheels for 25 years.  That was his Thursday job when he was in MN – which he loved doing.  When he retired, he delivered food to people that were younger than him!  He was a member of Holy Rosary Church and active in the KC’s, always working the pancake breakfasts and KC dinners.  His job was making and serving the mashed potatoes!  He served as Grand Knight in 1975.

He is survived by his three daughters, Diane (Bob) Gorden of Detroit Lakes, MN, Debbie (Mike) Fortin of Reno, NV and Cheryl (Randy) Swedberg of Mapleton, OR.  Bob had six grandchildren and 11 great- grandchildren.

He is preceded in death by his wife Mona, his parents and stepdad, Chauncy, two brothers, Pat and Bill, sisters-in-law Betty and Viola, and brothers-in-law Orville and Jiggs.

Bob’s funeral service is being held at Holy Rosary Catholic Church in Detroit Lakes, MN on Saturday June 4, visitation at 10:00 service to follow 11:00.  Lunch will be served downstairs in the church center.

To order memorial trees or send flowers to the family in memory of Robert Noyes, please visit our flower store.