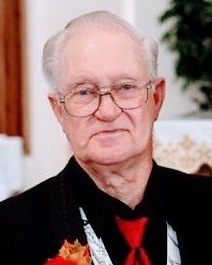 Raymond Obert Bakken was born May 23, 1937 in Park Rapids, Minnesota, the son of Theodore and Dorothy (Beeman) Bakken. He passed away September: 24, 2022 at home, in Waubun.

Ray grew up in the Otter Tail County, then later the Ponsford area, worked majority of his years as a mechanic.

In 1959 Ray was united in marriage to LaVon DeGroat. To this union four children were born. They made their home in Ponsford & moved to Waubun in 1991. He enjoyed fishing, hunting, karaoke, and being with his family & friends.

Ray was an everything to anything mechanic. Had a natural brain for fixing machines. No machine was too big or too small.

He loved to be outside, staying busy. When money got short, he went to the woods: logging, ricing, sawmill, hunting, fishing and so much more. With love and patience of a saint, dragging, his babies, grand and greats outdoors.

Love for his family was priceless and in his later years, after his wife’s passing was an avid karaoke fan, spending time with his friends and family, enjoying the tunes.

To order memorial trees or send flowers to the family in memory of Raymond Bakken, please visit our flower store.