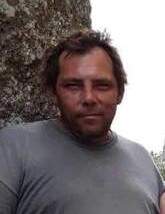 Preston Scott Spenst was born on May 4, 1969 in Breckenridge, MN to Robert and Betty (Berneking) Spenst. He was the middle child of three siblings. Growing up Preston and his family moved to Breckenridge, Abercrombie, ND and then they settled back down in Breckenridge.

Preston was united in marriage to Alvina in 1989 and to this union two children were born Patrick and Victoria. After a few years together the couple later divorced in 1998.

He then found love with Joy and they were married in 2001. He held a special place in his heart for Joy and Joy’s daughter Jasmine – his little baboon.

He worked for T.S. Dock and Lift services for eight years. For the last few years before his passing, he had been traveling to deliver bulk mail.

Preston enjoyed many things in life like; fishing, hunting, being outdoors, rock collecting, cribbage, cooking, and playing games. He liked old western movies, John Wayne and the Duke. He was an old soul in a young man’s body. He was a jokester and loved to make people laugh.  He loved learning about history and would often watch the History Channel. He collected Avon cars and was a big Denver Broncos fan, since the age of six!

Preston is preceded in death by his mother Betty McGuire, his stepdad Earl McGuire, his grandparents, his stepbrother Robert Spenst, his son Patrick, and his aunts Thelma and Kathy Berneking.  Preston welcomed his dad Robert L Spenst (01/22/2021) and Uncle Sam (Marvis Berneking) (01/26/2021) with open arms through the gates of heaven.

To order memorial trees or send flowers to the family in memory of Preston Spenst, please visit our flower store.