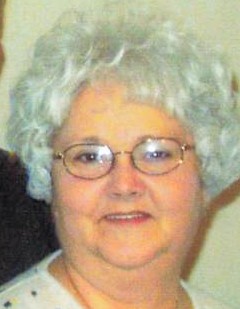 Patricia Ann “Patty” Jones, 70, of Callaway, MN, passed away at her home on Monday October 28, 2019. A Celebration of Life will be held on Saturday, November 9, at 11am at the Lakes Region Mennonite Church in rural Detroit Lakes, MN, visitation will be held one hour prior to the service.

Patricia Ann Russell was born on July 14, 1949 in Carlisle, PA to Charles and Elizabeth (Kretz) Russell.  Patty was the eldest of seven children.  She was raised on a farmstead near Newville, PA. She graduated from Newville High school with the class of 1968.  Patty met her first husband Ronald Spahr through her best friend Carroll Spahr.  The couple raised their two children Belinda Sue on March 17, 1976, and Glen Eugene on April 2, 1978.  in Newville, PA.   The couple later separated. Patty worked in a ribbon factory and then a catering and vending company.  Patty then met and later married William “Bill” Bays. The couple moved to the Girard - Youngstown area in OH.  She was sad to leave her family, and friends.   After the couple separated, Patty worked as a cashier in Niles, OH department stores, she then worked as a cashier at the Iron Skillet restaurant in Girard, OH, and at the Petro Travel Center Truck Stop.  While on duty there, she caught the eye of a wandering soul named David Jones. Her daughter convinced her to move with her family to Muskogee, OK and help her raise her grandkids.  While living in Muskogee, OK, her third and final husband David Jones proposed.  The two were married on July 7, 1997 in a civil ceremony at the local courthouse.  The couple later moved to the Detroit Lakes, MN area to help care for David’s mother.  While living here, Patty worked for the Country Inn and Suites, she also furthered her education earning a two-year degree in Office Administration from M State in Detroit Lakes.  After the family farm sold, the couple bought a rural building site east of Callaway, MN.  Patty worked as an assistant secretary for Team Lab and then started working as a caregiver for the Divine House.  In 2011, Patty retired to enjoy her church activities at the Assembly of God Church in Detroit Lakes and High Mileage group at the Community Alliance Church.

Patty will be remembered as a loving wife, mother, grandmother, and devoted Pentecostal believer.  Her final church home was among loved ones at the Lake Region Mennonite Church in rural Detroit Lakes, MN.

She is preceded in death by her parents; and brother Charles “Butch” Russell Jr.

To order memorial trees or send flowers to the family in memory of Patricia "Patty" Jones, please visit our flower store.