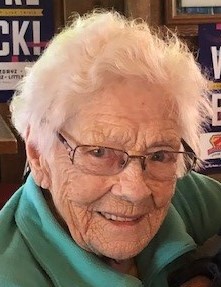 Patricia Elsie Netland of Audubon, MN, entered into glory with the Lord on Nov. 7, 2021.  Pat, as she was known to friends and family, was born November 3, 1931, in Ada, MN, to Jesse and Alice (Schlentz) Smith.  She grew up and went to school in Fargo, ND.

In 1950 Pat was united in marriage to Wayne Blees of Bowman, ND.  They lived in rural Garrison, North Dakota where Wayne was employed in the construction of the Garrison Dam which created Lake Sakakawea.  Wayne died in a construction accident at the dam site in 1953.

On February 11, 1954, Pat was united in marriage to James R. Netland of Audubon, MN, where Jim and Pat made their lifelong home together.  Pat worked in the home as a mother and homemaker and Jim was president of the First State Bank of Audubon until his retirement.  Jim passed away on July 2, 2003.

Pat and Jim enjoyed playing pinochle with friends and family, their many excursions into Canada, their flower beds, watching birds at the birdfeeders, and spending time at their summer lake cabin on Big Cormorant Lake and their permanent home in Audubon.  She also enjoyed making various projects in ceramics.  Pat was the childcare provider for several of her grandchildren when they were younger, and she found great pleasure in the time she spent with them.

Pat is survived by a son, Mike Netland of Menahga, a daughter, Kathy (Donald) Larson of Audubon, eight grandchildren and numerous great grandchildren.  She has one surviving brother, Paul Smith, and a surviving sister, Donna Johnson, both of Fargo, ND.

Pat was preceded in death by a daughter, Patty Nelson of Lake Park, MN, her parents, one brother and three sisters as well as Wayne Blees and Jim Netland.

At Pat's specific request there will not be a viewing nor a memorial service. Blessed be the memory of Pat Netland.

To order memorial trees or send flowers to the family in memory of Patricia Netland, please visit our flower store.