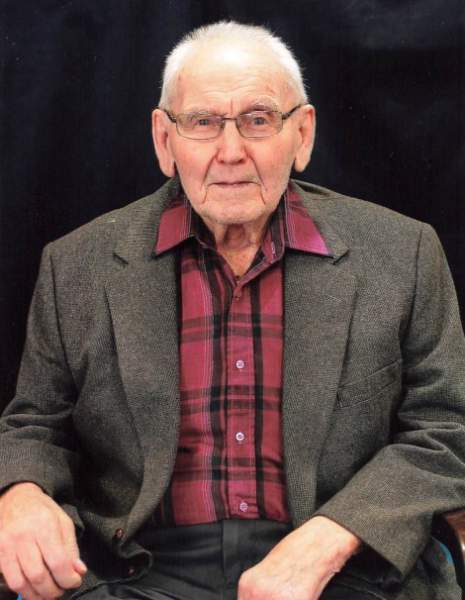 Ottis P. Yoder was born January 25, 1919 in Pierce County, North Dakota to Peter and Nancy Yoder, along with his twin brother Otis, joining 10 brothers and sisters.  Ottis attended country school through the 8th grade at Scotch Block country school near Wolford, ND. He attended school by horse and buggy in the spring and fall and team and bobsled in the winter.  When World War II was declared Ottis registered for the draft as a Conscientious Objector, going to a Civilian Public Service Camp on May 15, 1942. The next three years and nine months Ottis was in CPS camps in Weeping Water, NE; North Fork, CA; Terry, MT; Williamsport, MD; Three Rivers, CA; and Camino, CA. Serving the country in this way Ottis wanted his testimony to be that of peace during time of war.  On April 12, 1946, Ottis was united in marriage to Violet Joy Yoder following a 4 ½ year courtship.   While living in North Dakota, Ottis farmed and was an auctioneer.   In June of 1931 Ottis professed his faith and accepted the Lord after attending a series of revival meetings.  He remained an active member of Lakeview Mennonite Church in Wolford serving as SS superintendent and teaching.  He was called to ministry at Strawberry Lake Mennonite Church, Ogema, MN in April of 1960. He served as pastor for 26 years helping countless friends in the community of Strawberry Lake.   Ottis and Violet worked with Hospice of the Red River Valley for several years which was a ministry that was very important to them.   In 1973, he was ordained as Overseer of the conference serving churches in International Falls and Morrison, Ontario, Canada.  After retirement Ottis continued to help Delmar on the farm, gardening, enjoying his family and grandchildren especially making them blizzards. In his past time he loved restoring old horse drawn machinery and driving horses with Doyle.  Ottis’s life was honoring to his Lord and Savior and we know as he walked through Heavens gates he heard the words from Matthew 25:21, “Well done Thou Good and Faithful Servant”…

Preceded in death by his wife of 68 years, Violet Joy, his parents, six brothers, five sisters and one great-grandson, Ethen Doyle Schultz.

To order memorial trees or send flowers to the family in memory of Ottis Yoder, please visit our flower store.

Prayer Service and Time of Sharing