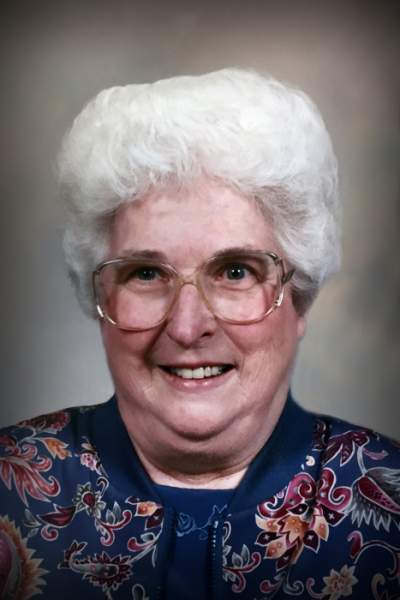 Nettie Jane Russell was born on an Ottertail County farmstead to Charles and Eva Chapman Russell on December 7, 1929.  She entered into well-deserved rest on July 26, 2017 at Ecumen Community in Detroit Lakes, MN.

Funeral services will be held on Wednesday, August 2nd at 11:00 am at the Seventh Day Adventist Church on Richwood Road, Detroit Lakes, MN.  Visitation will be held at David-Donehower Funeral Home Tuesday, August 1st from 5 to 8 pm with a prayer service at 7 pm; and for one half-hour prior to the service on Wednesday.

Nettie Jane was the 5th of nine children in a very close knit family.  She attended country schools in the Bertha Hewitt area through the eighth grade, then spent her high school years at Maplewood Academy in Hutchinson, MN. It was while working in the registrar’s office at Maplewood that Nettie met a young Vern Momb from Rochert, MN.  During the discussion of how to pronounce that last name, Nettie dissolved into giggles and a coworker finished Vern’s paperwork.  Fortunately, Vern was not finished with Nettie; they were married in 1949, living first in Rochert and then built their own home on Richwood Road in Detroit Lakes.

Nettie Jane was extremely organized, talented and industrious.  She worked in local dry cleaning shops repairing, altering and pressing garments.  When Vern bought his first truck, Nettie kept the books and learned about licensing, permits, taxes, and running a business.  Together they owned and operated Momb’s Trucking (no more giggles, she owned the name too) and Indian Hill Sales for decades.  Nettie was a life time member of the Seventh Day Adventist Church.  She served the Detroit Lakes church as treasurer for many years as well   serving on numerous committees and boards.  After selling Indian Hill Sales, Nettie used her sales skills in the realty market and while working in the children’s department at Norby’s Department Store.  Nettie and Vern traveled extensively during their lifetime together, for both business and pleasure.

Nettie Jane’s passion was her family.  She and Vern were blessed with daughter Linda in 1954 and in 1963 adopted their second daughter Margie.  They stayed in close contact with Nettie’s siblings and families, making hundreds of memories as all the cousins grew.  As sons-in-law and  grandchildren arrived Nettie shared her love of cooking and baking (especially lefsa), gardening both vegetables and flowers, sewing, collecting glassware, making clowns and pout dolls, and so much more (shopping and selling on e-Bay with Jess) with her children and grandchildren.  Though unable to actively teach and interact with her great grands in her declining years, nothing brought a smile to Nettie’s face like a visit from the great grand kids or a new PAD puppy in training.

Visitation: at David-Donehower Funeral Home Tuesday, August 1, 2017 from 5-8:00pm with a prayer service at 7 pm

To order memorial trees or send flowers to the family in memory of Nettie Momb, please visit our flower store.