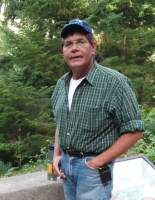 Michael was born May 1,1963 to Delbert and Darlene (Raich) Schultz.  Mike was raised in the Frazee area and graduated from Frazee High School with the class of 1981.  After high school, Mike went to the Vo-Tech for Mechanics and Electric.  Mike built houses for the housing authority in White Earth, worked various construction jobs and worked for CJ & J machine shop for over ten years before having to retire due to health problems.

Mike met Christine Kolbe and it was love at first sight.  The two were married on March 13, 2010 and made their home in Detroit Lakes, MN.  Mike was known to be able to fix and create anything.  Mike would be able to see something he could use and know he could build it cheaper than buying.  Mike enjoyed fishing, daily casino trips, and riding his four-wheeler into the woods to watch the wildlife with his favorite dog Molly.

Preceding Mike in death were his parents; brother Floyd Schultz and loyal dog Molly that passed away with Mike.

To order memorial trees or send flowers to the family in memory of Michael Schultz, please visit our flower store.