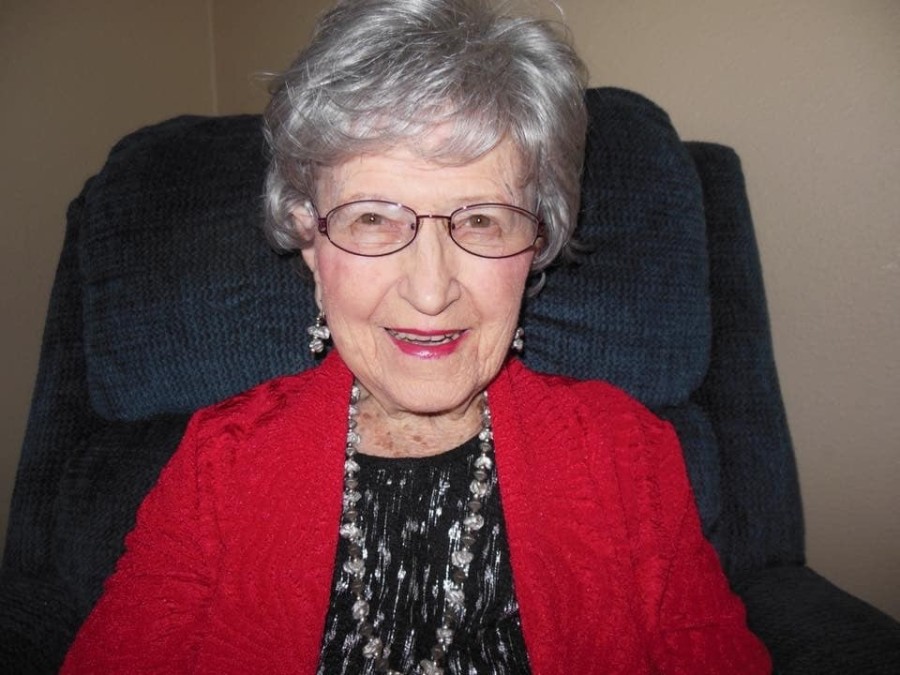 Maureen Helgeson, age 101, was born on February 22, 1918 in the home of her parents, Arthur and Martha Brosowske of Barney, ND.  She had an older brother, Vernon.  In December of 1923, the family drove to Pasadena, California in the same car with an aunt, uncle and cousins. A remarkable journey by today’s standards!  After 2 ½ years, the family moved back to Barney where Art resumed his trade as a carpenter.  Maureen graduated from Wahpeton, ND High School in 1937 and went on to the State Normal School in Valley City for two years and received a teaching certificate.  During her teaching career, she taught in Lamars County, ND, and LeRoy, MN where she meet her husband, Tillman Helgeson. During WWII she worked in the shipyards in Los Angeles and the VA Hospital in Washington, DC.  Maureen was married in 1947 and lived and taught 5th grade in Moorhead until she started raising her family. Tillman and Maureen lived in Moorhead until 1966 at which time they moved to a hobby farm just outside of Lake Park, MN. They raised three daughters, Rollie Haugen, Julie (Roger) Gould and Varian (Darrell) Halverson.  While living in Lake Park, Maureen became trained as a nursing assistant and worked at Sunnyside Nursing Home from 1967-1983 when she retired to be able to spend winters in Apache Junction, AZ  with other family and friends. She and Tillman were long time active members of Eskjo Lutheran Church outside of Lake Park.

Tillman died in 1990 and Maureen moved almost immediately to an apartment in Hawley where she lived until 2006 when she requested to move to Viking Manor in Ulen to be near friends and activities. She spent 29 winters in Apache Junction, the last when she was the age of 90.  She lived in several assisted living facilities as her needs changed, most recently at Diamond Willow in Detroit Lakes where she received loving care until she passed away.

Maureen loved to be busy. She was artistic and creative. Family and friends were recipients of her many paintings, both oil and acrylic, afghans, quilts and other handicraft items. She won awards at art shows for her paintings.  She was a letter writer.  She made many, many quilts for Eskjo Lutheran Church’s quilt mission and knit and crocheted close to 100 children’s sweaters that were sent to a mission organization.  The beginning of her real decline came when she could not longer make those sweaters due to arthritis in her hands.

Maureen left a legacy of her three daughters, 11 grandchildren, 19 great-grandchildren and 1 great-great grandchild. She was preceded in death by her parents, brother Vernon, husband Tillman  and son-in-law, Burton Haugen.  She had a strong, childlike faith and was more than ready to leave her cares behind and be welcomed into Heaven.

There will be a private committal service at Eksjo Lutheran Church cemetery, Lake Park, MN on a date to be determined.  Any memorials are requested to be sent to:

To order memorial trees or send flowers to the family in memory of Maureen Helgeson, please visit our flower store.