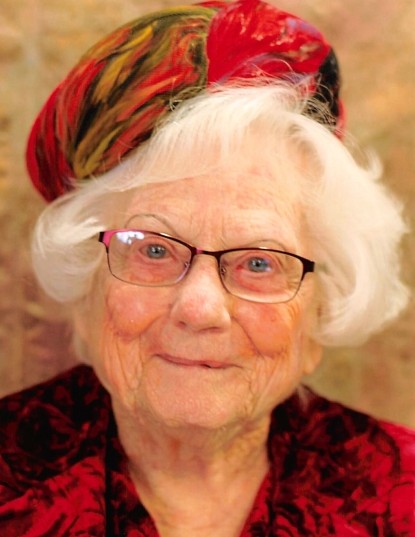 Mary Elizabeth McAndrews Komarek was born on November 18, 1924 in St Paul, Minnesota.  She was the 6th of 8 children born to Marcella and William McAndrews, a strong Irish family.  She attended St Vincent’s Grade School, and Mechanic Arts High School, graduating in 1942.  She worked at Northwest Airlines, in the payroll dept. after graduation.  She met the love of her life, Arthur J Komarek, and they were married on September 25, 1948.  To this marriage, three children were born – Barbara, Arthur Jr, and Ann.  Over the years, the family grew to include 8 grandchildren, and 19 greatgrandchildren.

You can’t mention Mary without including Art, as they were together for 66 years, and you seldom saw one without the other.  They both loved their family, and were proud of their accomplishments. They also enjoyed spending time with their extended family and friends.  For many years, they spent many holiday celebrations at “the Farm” in South St Paul, and were in a Card Club with friends.  They also volunteered at St Bernard’s Church, in St Paul.  Much time was spent attending school events for both their children, and in turn, their grandchildren. They were always proud of each member of their family.

Mary worked as a homemaker until her children were older, then she decided to rejoin the workforce.  She took a job with Dayton’s, where she was frequently recognized as the “Top Banana” seller in the children’s Shoe Department - an achievement she was very proud of.  In addition to Mary’s new job, she and Art took up a new hobby – Square Dancing.  Gradually, they expanded their hobby into Round Dancing as well.  They made many new friends while dancing, and went to many different areas in the surrounding Midwest area.  They loved coordinating their outfits, and people enjoyed seeing what new outfit they were modeling!

Art’s illness progressed over the years, and in the late 1990’s, they moved from their beloved home to a Senior Living apartment by Como Lake.  For many years, they traveled up to the Veronen family farm, on Strawberry Lake.  Initially, it was a wonderful campsite.  When Mathew and Barb built their retirement home there, Mary and Art decided to move to Detroit Lakes as well.

Mary and Art enjoyed attending Mass at Holy Rosary during a multitude of camping weekends, so it was an easy decision to move to the Winchester Apartments in December, 2006.   The years went by quickly.  When Art was no longer able to live independently, he moved to Oak Crossing.  For the next 5 years, Mary spent every day, all day, with Art.  She was never one to remain idle, so she helped the dining room staff with the residents, while keeping a watchful eye on Art.  When Art died in 2015, Mary started volunteering on Monday mornings, visiting the residents at Oak Crossing.  She enjoyed speaking with the residents, and being a part of the volunteer group.  Mary was always ready with a beautiful smile and hug for everyone, and they looked forward to her visits.

In December, 2016, Mary’s health declined, and she moved into Oak Crossing.  Although she missed her independence, she was welcomed into Oak Crossing as family, and it truly became her home.  She was grateful to have such wonderful care there.  Mary and Art’s family appreciated the loving care both received, and knew they were in very capable hands.  Detroit Lakes became the adopted town of the extended Komarek family. Mary is preceded in death by her husband, Arthur Komarek, Sr, her son-in-law Mathew Veronen, her parents, and her siblings – Bill (Florence), John, Don (Marge), Marce (Joe Behr), Vince, Therese (Bud Gisch), and Bob.

To order memorial trees or send flowers to the family in memory of Mary Komarek, please visit our flower store.