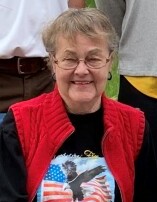 Marcia was born in Tracy, MN to Arthur and Clara Refsal and grew up on the family farm with her brother Harley where they attended country school and eventually graduated high school from Hoffman, MN. Later she attended Augsburg University on a music scholarship. On May 31, 1958 she married Walt Sanders. They raised three children, Shari, Tom and Trevor in both Casselton and Jamestown, ND.

Later in life Marcia enjoyed traveling the world, knitting afghans for loved ones, golfing (she had 2 holes in one!), lake living and the Arizona sun. She always enjoyed fashion and loved working as a consultant at Norby’s as well as experimenting in the kitchen at home.

Memorial service will be held at 1:00 pm on Friday, October 23 at the David-Donehower Funeral Home in Detroit Lakes, MN.  Visitation will be one hour prior to the service.

In lieu of flowers, the family is requesting memorials be sent to Hospice of the Red River Valley.

To order memorial trees or send flowers to the family in memory of Marcia Sanders, please visit our flower store.
Open