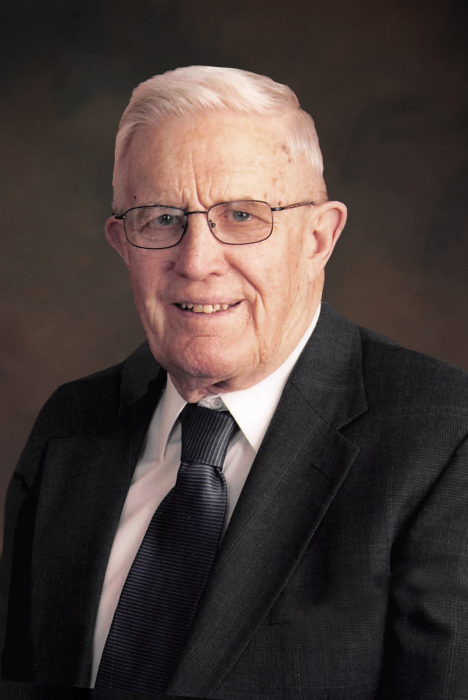 Lyle Eugene Raun was born January 13, 1928 on a farm northeast of Ulen, MN to Burton and Agnes (Lunde) Raun.  The family moved to Kathryn, ND for two years and then lived for ten years at Pequot Lakes, MN, moving back to Ulen in 1940.  Lyle worked for the Ulen Creamery before entering the army in 1952. Following his discharge in 1954, he worked for the Ulen Grain Elevator.  In 1957, he became the manager of the elevator in Callaway, MN.

Lyle was united in marriage to Marie Czech on July 11, 1959 in Royalton, MN.  They made their home in Detroit Lakes, MN for a year and then moved to Callaway.  Lyle served as the mayor of Callaway for many years and was also a member of the Callaway Fire Department.  In 1980, be took the job as manager of the Grain Co-op in New York Mills, MN and the family moved there.  When he retired in 1991, the family returned to Detroit Lakes.  Following his retirement, he worked for Mid-State  Auction in New York Mills and then for Nereson’s in Detroit Lakes for several years.

Lyle was a 63 year member of the American Legion and was also a  member of the Knights of Columbus.  He enjoyed playing softball in the Callaway Old Timers League and driving trips.

He was preceded in death by his parents, a brother, Maynard, a sister, Ingeborg Asleson and a son-in-law, George Wozniak.

To order memorial trees or send flowers to the family in memory of Lyle Raun, please visit our flower store.