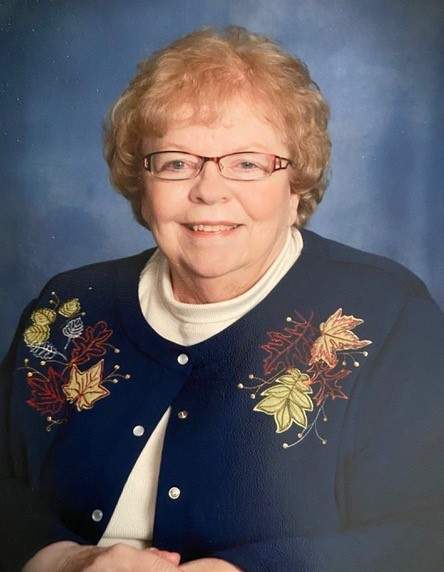 Wrapped in love within the embrace of her three children, Luanne Faye Hanson was received into the arms of Jesus and reunited with the love of her life, Ordell Gary Hanson, on what would have been their 62nd anniversary on February 14, 2021.

Luanne was born in La Crosse, Wisconsin on June 28, 1938 to Carl and Mildred Rude of Peterson, Minnesota, which was home to Luanne for the majority of her first 18 years that were filled with small town opportunities to share her gifts as a pianist, vocalist and cornet player, cheerleader, editor and columnist of the school newspaper, and “steady” to Ordell Gary Hanson, with whom she walked down the aisle as ring bearer and she as flower girl in his sister, Betty’s, wedding when they were five years old … shared Homecoming royalty with during their senior year … and married on February 14, 1959, when their legacy of love, faith, and family began.

Luanne and Gary [Ordell’s middle name that became more familiar than his given name] began their married life during his senior year at Luther College in Decorah, IA,  and over the years his business success brought them to Nebraska, Wisconsin, Minnesota, Virginia, California, and New Jersey prior to the decision to return to their Minnesota roots in 1977, when they purchased a dairy farm north of Wadena. Wherever they landed, Luanne was always a presence of love, support, and encouragement as a homemaker, wife, mother, grandmother, great grandmother, and provider of comfort food extraordinaire.

Throughout her life, it was her family that always came first. Everything she loved to do was done with her family in heart and mind … the prayers she prayed, the meals she cooked, the goodies she baked, the music she played, the songs she sang, the letters she wrote, the afghans she knitted or crocheted, the oils she learned to paint with, and the countless words she has written and typed while sharing her gift of poetry and 25 years worth of “Memoirs” … a family legacy endeavor she and Gary began in 1995. Each year on Christmas Eve, Luanne’s three children could look forward to receiving the current volume of Memoirs and a new collection of poems.

Luanne was a beacon of light in all places and was the kindest, most genuine, thoughtful, and caring person that all who knew her would say they had the privilege to know. When physical disabilities led to a necessary move to Lincoln Park Assisted Living, she became an Essentia Health volunteer who visited hospitalized residents and/or those from Lincoln Park who had transitioned to skilled nursing care. She also took it upon herself to make greeting cards for residents and staff on her computer, where she enjoyed spending time on Memoirs and poetry, and connecting with friends and family through email and social media. Luanne never stopped rising above her physical limitations with profound grace, faith, strength, determination, and joy in living and loving.

Luanne was the loving and devoted mother to Brian (Joni) Hanson of Verndale, MN; Rev.Laurie (Dean) Albertson of Ulen, MN; and Brad (Emily) Hanson of Shakopee, MN; grandmother to Heather Stine,  Michael (Whitney) Stine,  Austin (Mackenzie) Hanson, Anaka and Andy Hanson; and great grandmother to Makenna, Conner, Capri, Emmanuel (Manny), Calia, Zaraiya (Raiya), Cami Luanne, and Elijah Stine. She was preceded in death by her parents, three infant siblings, and her beloved husband, Ordell Gary Hanson. Luanne was a faithful, beautiful, humble, compassionate, and empathetic woman with a servant heart, and her endearing presence is going to be greatly missed.

Walk through visitation will be from 5-7 p.m. Thursday, Feb. 18, at David-Donehower Funeral Home in Detroit Lakes, Minn. A funeral will be 11 a.m. Saturday, Feb. 20, at Grace Lutheran Church in Peterson, Minn. Interment will be in Grace Lutheran Cemetery West in Peterson. Arrangements by The David-Donehower Funeral Home in Detroit Lakes.

To order memorial trees or send flowers to the family in memory of Luanne Hanson, please visit our flower store.
Open