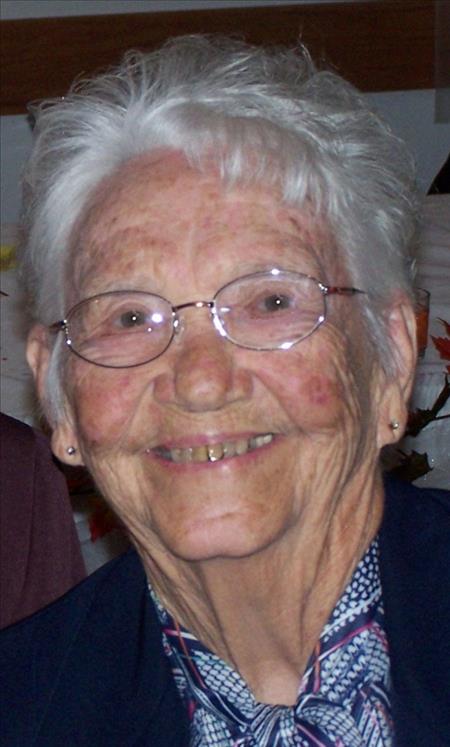 Lillian "Lil" Clara Maruska, age 92, of Detroit Lakes, MN, passed away peacefully at the Emmanuel Nursing Home in Detroit Lakes on April 29, 2017, surrounded by her family after a short illness. A Mass of Christian Burial will be at 10:30 am on Saturday, May 6, 2017, at Holy Rosary Catholic Church in Detroit Lakes, with a time of gathering an hour prior. A Visitation will be held on Friday, May 5 from 5:00 pm to 7:30 pm at David-Donehower Funeral Home with a Christian Mothers rosary at 6:30 followed by a prayer service at 7:00. The burial will be at Holy Rosary Cemetery following the Mass. Lil was born on April 28, 1925, on the family farm in Ogema, Minnesota. Her parents were Hugo and Alice Mertens and she was the oldest girl of fifteen children. She attended school at the Mission School in White Earth and high school in Detroit Lakes where she lived with Al and Clara Friesen helping to care for their small children. Lil met her future husband, George Maruska, when she accompanied his girlfriend to a double date with one of his Army buddies. Something clicked because he called on her the next day. They began a correspondence courtship that led to their marriage on July 24, 1945. When George left the Army they settled in Detroit Lakes to raise their family. They had eight children and Lillian's religious beliefs and faith guided their development. She provided a trusting and safe home with loaves of homemade bread and dozens of baked cookies to help the children grow and mature. She was a lifelong proponent of Catholic education and insured that each of her children had the opportunity to partake of that education through high school. Lillian was a member of the Christian Mothers, Resurrection Choir, VFW Auxiliary, American Legion Auxiliary, a lifelong member and volunteer for Holy Rosary Parish, annual participant in the Holy Rosary School Marathon, and, with her husband, a member of a Dance Club and the DL Campers. Lillian's life was a continuing search for knowledge. She found interest in nearly every subject, always wanting to learn more. She enjoyed painting, crocheting, knitting, sewing, crafting, crossword and jigsaw puzzles, reading, gardening, and the outdoors. She collected glassware and dishes. She was a conservationist in that she hated to see anything go to waste. She was a recycler before there was recycling, finding ways to utilize what others would just throw away. Her home and yard were filled with craft items she had made from old grocery bags, plastic bottles, caps, and tin cans. Lillian was preceded in death by her father and mother, Hugo and Alice Mertens; BROTHERS Anthony, Raymond, Edwin, Clarence, August; SISTERS Ethelbert Huska, Margaret Pollock, Bernadine Mertens; GRANDDAUGHTER Kelsey Maruska. She is survived by her husband, George Maruska, Sr.; three SONS Wayne (Renee), Dennis (Dale Schmitzer), and George (Laurel); five DAUGHTERS Carol (Marvin) Pierce, Catherine (Darryl Salter) Maruska, Louise Ogaard, Mary (James McDougall) Maruska, Gina (Michael) Erickson; 13 GRANDCHILDREN, Christina (Brian) Stonecipher, Travis (Sedruola) Maruska, Tyler, Kyle, and Zachary Maruska, Erika (David) Bishop , Andrew Ogaard, Elizabeth (James) Cochran, Philip Ogaard, Anna (Cody) Brekken , Amanda (Michael) Maruska-Baker, Nicole and Katherine Erickson; 11 GREAT-GRANDCHILDREN Canyon, Callie, and Emily Stonecipher, Vladimir and Anastasia Maruska, Lauren and Brooke Bishop, Freya and Finn Brekken, Devyn Cochran, Greyson Baker; three SISTERS Evelyn Buhl, Alice Pye and Mary Ann Teiken; three BROTHERS Hugo (Carol) Mertens, Ronald Mertens and LeRoy Mertens. In lieu of flowers, the family requests donations to Holy Rosary School or the Ecumen Foundation George & Lillian Maruska Scholarship Fund.

To order memorial trees or send flowers to the family in memory of Lillian Maruska, please visit our flower store.