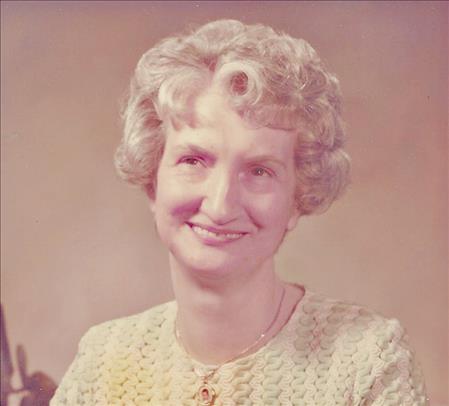 LaVonne Frances Jacobson, 92, Detroit Lakes, died Wednesday, January 25 at Emmanuel Nursing Home in Detroit Lakes. Visitation will be held at Holy Rosary Catholic Church on January 27, from 5-6:30 pm. Rosary will be at 6:30 pm followed by a prayer service. The Mass of Christian burial will be at 10:30 am on January 28 followed by interment at St. Mary's Cemetery in Callaway. LaVonne Frances Jacobson was born on a farm near Wanda, in southern Minnesota. She was the third child and first daughter of Ruth and A.C. Matter. When she was a toddler the family moved to a farm near Hitterdahl, MN. Several years later they moved near Callaway. She enjoyed cooking and developed a reputation for her bake goods at an early age. During the Second World War she took a job in the Twin Cities as a maid for a wealthy Jewish family. She was impressed by their elegance about dining; something she always carried with her was an appreciation of doing things well. After the war, she took a position in Crookston working in the Catholic hospital under the tutelage of two German sisters. She always said that is where she really learned to "be clean." While she was living in Crookston she married Merrill C. Jacobson and had a daughter, Merylann (Mimi) and a son, James Jerome. Following her divorce, LaVonne and her daughter returned to her parent's farm and she began a career as a professional cook for the Detroit Lakes public schools. When Ruth and A.C. retired to Detroit Lakes, LaVonne eventually moved to Holy Rosary School where she was a beloved cook for twenty years. At the same time, she was also the children's librarian at the public library for twenty years. Between her two workplaces she became a counselor and mentor to hundreds of DL children. She retired in 1988 due to health reasons. In 1997 she moved to Silver Spring, Maryland, where she spent 5 years receiving medical care that eventually allowed her to return to Detroit Lakes. She was a resident of Lincoln Park for 7 years before her poor health brought her to Emmanuel Nursing. LaVonne was a well-known bridge player at the DL Country Club and always loved a good game. She also enjoyed traveling. She had visited all 50 states and 17 foreign countries, often traveling with her daughter's family. She was a history buff and published a book documenting 350 years of Matter family history. LaVonne is survived by her only daughter, Merylann and husband Marvin (Silver Spring, Maryland), Michael and Misty Schuttloffel and their five children (Topeka, KS), Matthew and Lauren Schuttloffel and their 2 sons (Vienna, VA). She is also survived by 3 of her six siblings: Jerome Matter and wife, Mary (Detroit Lakes), Cleo Steffl (Detroit Lakes), James Matter and wife Betty Callaway) and numerous nieces and nephews and grand-nieces and nephews. She was preceded in death by an infant son, James Jerome, and siblings Ralph Matter, Aileen Melis and Linus Matter.

A Rosary Service will be held at 6:30PM followed by a Prayer Service at 7PM.

To order memorial trees or send flowers to the family in memory of LaVonne Jacobson, please visit our flower store.