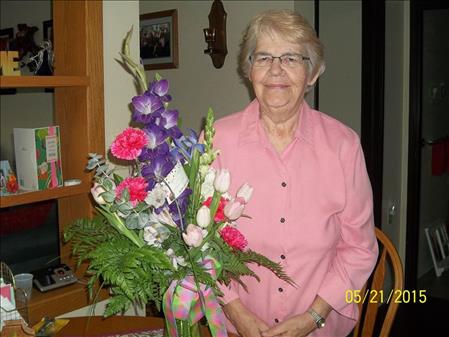 Kathryn "Kay" Faye Drewes, age 76, of Detroit Lakes, MN, passed away on Thursday, February 23, 2017, at Diamond Willow Assisted Living in Detroit Lakes, under the care of the Hospice of the Red River Valley. A memorial service will be at 1:00 pm on Friday, March 3, 2017, at Trinity Lutheran Church in Detroit Lakes. A time of gathering will begin an hour prior. David Donehower Funeral Home is assisting the family with arrangements. Kay was born on May 20, 1940, to Hjalmer and Margaret (Mann) Brolin in Detroit Lakes, MN. She attended school in Detroit Lakes and graduated in 1958. She then attended business school. After graduation, she worked for Evans's Grocery Store. She was united in marriage to Clarence Drewes on October 8, 1960, at Trinity Lutheran Church and together they raised four children. Kay went on to work as a bookkeeper for Drewes Construction Co. from 1960 to 1985. She also worked for the Detroit Lakes Credit Bureau, the Dakota Clinic in Fargo, and for Green Thumb at the Lamplighter. Kay was a sweet and loving person who loved to care for others, and was particularly focused on her family. She cared for her mother and visited her daily after her father passed. Kay also enjoyed cooking, baking, and gardening; every year she would can all that she grew from her and her parent's garden. She always made a lot of pickles and jellies.

She is survived by her children, Dion Drewes of Detroit Lakes, Natalie (Fred) Mattila of Mounds View, MN, Keith (Mary) Drewes of Detroit Lakes, and Holly (Larry) Moe of Frazee; a sister, Julie (Roger) Miller of Marion, ND; six grandchildren; three great-grandchildren; many nieces and nephews; and her pet cat, Daisy. She is preceded in death by her parents, Hjalmer and Margaret; and a brother, Milo.

To order memorial trees or send flowers to the family in memory of Kathryn Drewes, please visit our flower store.