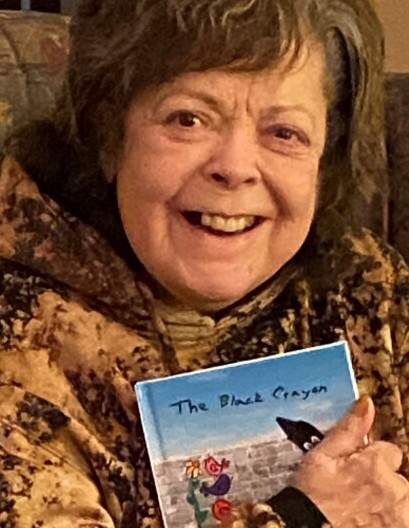 Kari Lynn (Pratt) Bishop was born in Fargo, ND, on August 5th, 1960, to Janet and Richard (Dick) Pratt.  She died in an apartment fire in Detroit Lakes, MN, on January 29, 2022.
Kari’s life and education began in River Oaks, Moorhead, MN where her spirited personality developed, and she became an interesting and lovable little person to everyone who knew her.  It was Ms. Dorothy Dodds at Moorhead State University, Kari’s Kindergarten teacher, who first informed Dick and Janet of Kari’s high intelligence, but suggested to them that they give her one more year at home for continued social development,

Kari’s family then moved to Oregon, Wisconsin and Mississippi. It was in Madison where Kari met Mrs. Marlene Cummings who inspired her story, The Black Crayon.  The family landed back in Fargo when Kari was 10. She graduated from Fargo North High School in 1978.

Kari loved her zodiac sign, Leo, because of its strength and bold color. It inspired many of her drawings, paintings and stories. Yet hurt feelings with schoolmates would often cause her to withdraw.  Her parents would say she was a fun, interesting, and “complicated” kid.

The teen years presented many challenges for Kari, her family, her friends, teachers, and counselors.  She had close friends, but at the same time spent many lonely, troubled hours. Perhaps these conflicts were the source of her artistic creations.

In her late teens, Kari was sent to live with family friends in Texas where she married and had one daughter, Naomi June.
Several years later Kari attended MCTC in Minneapolis, concentrating on art and design.  However, becoming troubled by the manipulative aspect of advertising, she left the program before graduation.

Kari then moved her creative talents to floral design and moved back to her home area to pursue this career and be closer to family. Kari’s last few years were spent there struggling with addiction, getting sober, and finally fighting cancer.  It became her most important goal in her life to regain her health and to salvage her relationships with her beloved family and friends.

It was Kari’s dream that her story, The Black Crayon, would make a difference for children and families. Kari was on the brink of publishing The Black Crayon – the story that she wrote as a 4th Grader in Madison. Kari’s family requests that friends support Kari’s story in lieu of flowers at https://blackcrayonbykaripratt.com. She will be remembered and loved for this, and she leaves behind a loving grateful family.

Celebration of life will be held at David Donehower Funeral Home on February 25th Service at 3 pm. Visitation 1 hour prior.

To order memorial trees or send flowers to the family in memory of Kari Bishop, please visit our flower store.