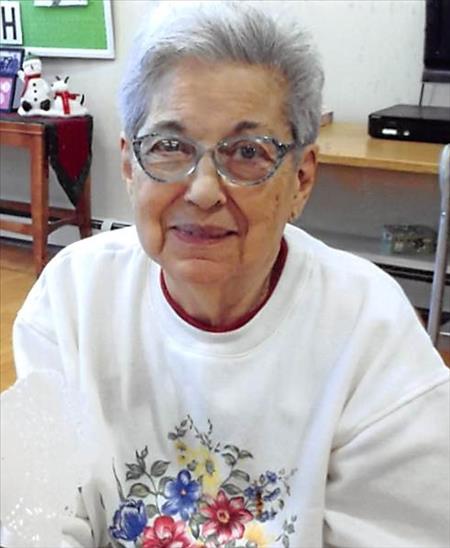 June Elizabeth Pederson Wood was born October 20, 1930, to Rose and Frank Sandberg in Spring Prairie, MN. In the 1930's, their family moved to Vergas, MN and lived on a farm where she attended school. On October 25, 1946, she married Walter Pederson. They lived in Pelican Rapids, Wilmar, Fergus Falls, and then moved to Detroit Lakes in 1955, where she resided until her death. They loved to work side by side in projects and built their home on Madison Avenue. She was a stay at home mother that loved to bake, garden, can fruits and vegetables, and have coffee with the neighbor ladies. She enjoyed crocheting and was proud of the 37 rippled afghans that she made. She also sewed all of her daughter's clothes. She was active with her three children's sports and other activities. Walt died October 1st, 1972. On October 6, 1987, she married Jack Wood. They spent 12 years enjoying time together camping, gardening, planting flower beds and maintaining their home. Jack passed away April 24th, 1999. In 2013, she moved to the Lamplighter Manor and then to the Cottage in 2015. She enjoyed the staff immensely. Her sense of humor was enjoyed by all. She is preceded in death by her parents, Rose and Frank Sandberg; two sisters, Mary Sandberg, and Maybell Bakke; a brother, Raymond Sandberg; an infant son; a son-in—law, Tom Paulson; and her husbands, Walt Pederson, and Jack Wood; and a step-daughter, Junelle Anderson. She is survived by her children, Wayne (Debra) Pederson of Fergus Falls, Jeanine (Wayne) Syverson of Sioux Falls, and Cathy (Tom) Paulson of Owatonna; an honorary daughter, Sue Fasteen Berg of Detroit Lakes; 24 grandchildren; 19 great grandchildren; step children, Jim (Lois) Wood of Detroit Lakes, Gary (Carol) Wood Of Clever, MO, and Annie (Paul) Schack of Grand Rapids.

Visitation continues one hour prior

To order memorial trees or send flowers to the family in memory of June Wood, please visit our flower store.