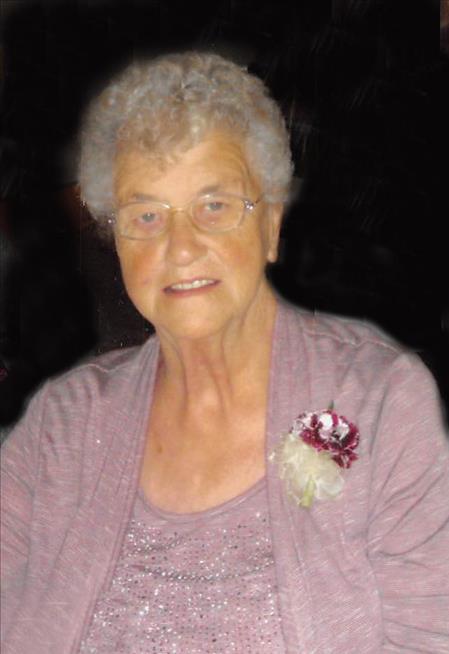 Joan Alice Watland, 82, Detroit Lakes, MN passed away peacefully on February 18, 2017 at Oak Crossing in Detroit Lakes. Joan was born on June 25, 1934 to Frederick and Rosetta Wicks in Reading, Berks, England. She attended Alfred Sutton Primary School in Reading where bible studies were an area of focus. Joan also studied and mastered the French method of cooking at a Reading high school, going on to use those methods throughout a lifetime of cooking for family, friends and others fortunate enough to be on the receiving end of her fabulous meals. Joan also worked for Huntley & Palmers and Pilkingtons in Reading. During her young adulthood she also enjoyed dancing at formal ballrooms in London and attending the London theatre. Joan married John Watland, her United States WWII G.I. groom, on January 14, 1956 in Reading. After arriving in the States she first moved to central North Dakota (staying at the Tufte family farm), later moving to Montana and finally settling in Detroit Lakes. In Detroit Lakes she began a long career in food service that included cooking and waitressing at Mickey's Diner and serving as a deli chef at Red Owl and Evans grocery stores. Many customers will remember Joan for her wonderful sense of humor, her strong work ethic, her great cooking and her can-do British spirit. Joan shared her heart with two countries, starting with her homeland of England, where as a young girl she survived the nightly bombings and deadly attacks from Nazi Germany during World War II. The indomitable will and never-say-die spirit of Britain's leader during that time, Winston Churchill, became hallmarks of Joan's own personality over the rest of her life. Joan loved returning to England to visit family and friends and took many memorable trips over the years to her hometown of Reading and nearby London; Windsor Castle; Bath, known for its Roman Baths; Oxford; Alderney; Devon and Cornwall; and Edinburgh, Scotland. She made several of these trips with her four children. In her adopted home of America Joan loved the big sky of Montana, where she first settled with her husband John and where they began their family. She also loved the forests and lakes of Minnesota, taking many trips to Grand Marais on the North Shore of Lake Superior over the years. She also traveled with her family to national parks in North Dakota, South Dakota and Wyoming as well to the Wisconsin Dells. Joan was a devoted mother of four and a loving wife who adored spending time with her beloved grandchildren, great-grandchildren and a great-great grandchild. All of her grandchildren brought her an abundance of joy, love, and smiles, especially in her last years. Joan is survived by her husband John; son John (Pat) Watland; son Jim (Marsha) Watland; son Jeff (Jodi) Watland; and daughter Jean Watland (David Zielinski). She also is survived by nine grandchildren, 12 great-grandchildren and one great-great grandchild. Joan was preceded in death by her parents and beloved brothers Leslie, George and baby Kenneth; sister-in-law Pat; Cousin Norman; and innumerable loved ones and friends in her cherished England and America. A special thank you to the staffs at Essentia Health-Oak Crossing and Red River Valley Hospice for their care of Joan over the past few years. Visitation for Joan will be Thursday February 23, 2017 from 5 p.m. to 7 p.m. at the David-Donehower funeral home in Detroit Lakes. A prayer service will follow at 7 p.m.

A Prayer Service will take place at 7PM for all family and friends.

To order memorial trees or send flowers to the family in memory of Joan Watland, please visit our flower store.