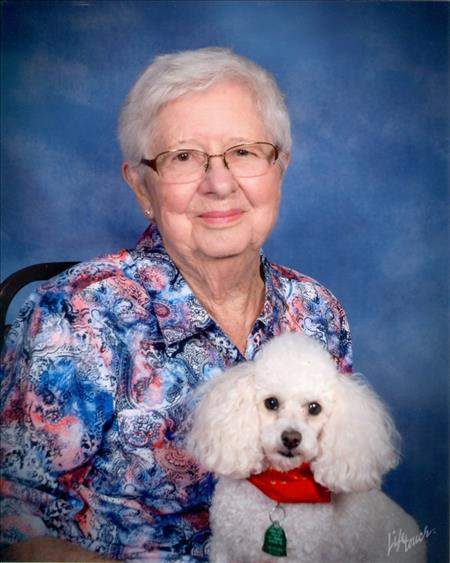 Helen M. Anderson 91, Detroit Lakes, died Tuesday, July 11 at Essentia Health- Oak Crossing Nursing Home. Funeral Services for Helen will be held Tuesday, July 18 at 11AM in St. Peter’s Lutheran Church rural Audubon, MN. Visitation will be held one hour prior to services. Helen Marie Anderson was born May 17, 1926 in Ogema, MN to George and Amanda (Erickson) Gebeke. She attended country school in Detroit Lakes and graduated from Dilworth High School. On June 8, 1946 Helen was united in marriage to Kenneth Rost in Moorhead, MN. Helen worked various jobs around the Moorhead area and when her husband became ill, Helen became his primary care taker. Kenneth passed away May 8, 1982. On October 19, 1990, Helen was united in marriage to Roger Anderson. Roger and Helen enjoyed travelling extensively through the United States in their motorhome. During the summers they enjoyed time spent at their lake home on Prairie Lake near Pelican Rapids. When Roger’s health started to fail, they permanently made Detroit Lakes their home in 2011. Helen was a talented seamstress, enjoyed gardening, riding her bike and spending time with her many dogs over the years. Helen’s giving nature and inviting personality will be missed by all her family and friends. Helen is survived by her siblings: one brother, Harold (Edwina) Gebeke of Detroit Lakes, two sisters: Dorothy Sebelius of Dunseith, ND and Marjorie Schroeder of Detroit Lakes along with numerous nieces and nephews and two special people whom Helen had the privilege to care for. She is preceded in death by her parents, George and Amanda, 1st husband Kenneth Rost, 2nd husband Roger Anderson, one brother: Edward Gebeke and three sisters: Florence Priewe, Laura McDowell and Myrtle Leegard.

One Hour Prior to the Service

To order memorial trees or send flowers to the family in memory of Helen Anderson, please visit our flower store.