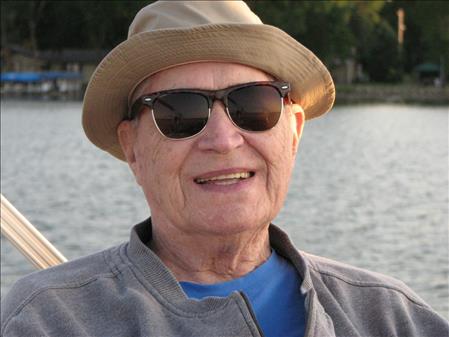 Harvey L. Janes, 92, Detroit Lakes, MN formerly of Aberdeen, SD, died Saturday, August 27 in, Detroit Lakes, Minnesota. Mass of Christian Burial will be held Friday, September 9 at 2PM in Holy Rosary Catholic Church in Detroit Lakes. Visitation will be one hour prior to Mass. Harvey Landru Janes was born October 23, 1923 in Doland, SD to George and Hilda (Landru) Janes. On May 6, 1943 he was inducted into the United States Navy during WWII. He proudly served his country until he was honorably discharged December 20, 1945. After returning home, he continued his job with the Aberdeen Newspaper. On August 9, 1948 Harvey was united in marriage to Alice Jean Cotman. From 1945-1985 Harvey was the mailroom foreman for the Aberdeen American News. He worked for the Aberdeen Newspaper for 46 years. Harvey enjoyed reading, yard work, gardening and playing bridge. He was a devoted Minnesota Twins and Minnesota Vikings fan through the years and rarely missed a televised game. He will be remembered and missed by his four children: Diane (Terry) of Tucson, AZ, Don (Terry) Janes of Detroit Lakes, Doug Janes of Anchorage, AK and Dana Janes of Yankton, SD. He is also survived by one brother: Wayne Janes of Bloomington, MN, 5 grandchildren, 7 great grandchildren and many nieces and nephews. He is preceded in death by his parents, his wife Alice (2009), one brother: Ivyl Janes and one sister: Celia White.

To order memorial trees or send flowers to the family in memory of Harvey Janes, please visit our flower store.