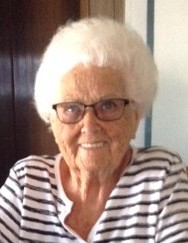 Glenna D. McEvers passed away peacefully on Feb 18, 2021 at her apartment in Detroit Lakes surrounded by her family.

Glenna was born Jan 4, 1927 to Herbert and Ella Rosenfeldt of Sabin, MN. She was a member of Trinity Lutheran Church, and graduated from Moorhead High School, and was proud to have been a Moorhead Spud.

Howard and Glenna moved to Scottsdale, AZ in 1970.  In 1975 Howard retired, and they moved to Port Ludlow, WA. Glenna took a position as post mistress there. Howard passed way in 1990. Glenna returned to Arizona and lived in a retirement park in Mesa. She enjoyed many activities including board games, bingo, whist, swimming and shuffle board. She was active and interested in sports.

In 2019, she moved to Detroit Lakes to be near her son Jay of Vergas, and her daughter Cindy Egge of Detroit Lakes. Over the years, she kept in touch with family friends, and neighbors, by email.

She was preceded in death by her sisters, Adeline Barthalomaus, and Lois Lokken, Sabin, MN.

At her request, no formal service will be held. Her final resting place will be Port Ludlow, WA.

To order memorial trees or send flowers to the family in memory of Glenna McEvers, please visit our flower store.