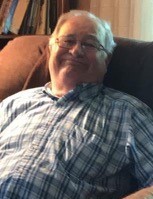 Gerald Allen Spiesz was born June 15, 1941 in Fargo, North Dakota, the son of Woodrow and Eleanor (Fuchs) Spiesz. He passed away August 6, 2021 at St. Mary’s Hospital in Detroit Lakes.

Jerry grew up in Moorhead and graduated from Moorhead high school with the class of 1959. He continued his education at Moorhead State University and later joined the National Guard.

In January of 1965 he was united in marriage to Linda Bekkerus at Our Saviors Lutheran Church in Barnesville. To this union three children were born. They made their home Lake Park. Jerry worked for John Morrell for 25 years and over the years drove truck for Booth Trucking and Transystems.

He enjoyed fishing, wood working, collecting bird ornaments, and traveling. Jerry and Linda traveled through 40 states and 6 Canadian provinces. Most recently Jerry had been active in Bible study at Lake Park Lutheran Church.

He was preceded in death by his wife Linda in 2019; parents: Woodrow and Eleanor Spiesz; son-in-law: Christopher Boechler.

To order memorial trees or send flowers to the family in memory of Gerald "Jerry" Spiesz, please visit our flower store.