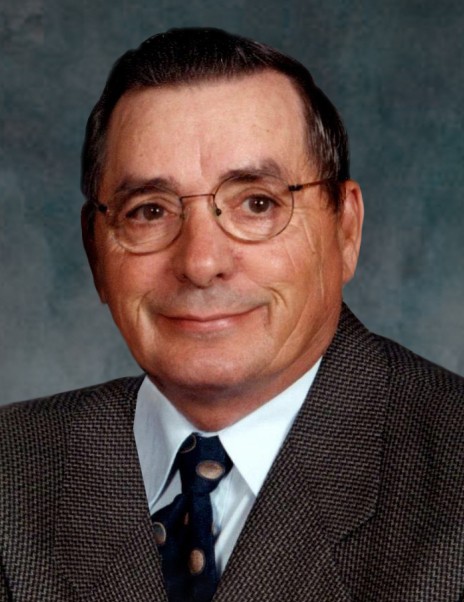 Gerald Joseph Lorenz, known to many as “Jerry” was born November 8, 1933 along with his twin sister Jean, to Jacob and Eva (Gellner) Lorenz at his grandparent’s farm in Langdon, ND.  He was raised and educated in Langdon, graduating from St. Alphonsus Catholic High School.  In 1953, he was drafted into the United States Army.  Jerry proudly served his country for two and half years and was stationed overseas in Japan.  Following his honorable discharge Jerry returned home to Langdon to help on the family farm.   In 1957 he enrolled at the North Dakota State School of Science in Wahpeton, ND, earning his electrical certificate in 1959.   On July 28, 1959 Jerry was united in marriage to Myrna Hooey.  They moved to Detroit Lakes in 1959 where Jerry worked for Aldoph and Ratz Electric, now Mark’s Electric.   In December of 1972, Jerry was involved in an accident while serving with the Detroit Lakes Fire Department.   Following his accident, Jerry starting working for the state of Minnesota as an Electrical Inspector from 1973 until his retirement in 1996.   Since 2004, Jerry and Myrna enjoyed their winters in Yuma, AZ and their summers at their lake home near Detroit Lakes.  He enjoyed going fishing, pontoon rides, pulling his grandchildren on skis and tubes during the summer and hunting in the fall.  Jerry had a wonderful sense of humor and would drop everything to help a family member or friend in need, especially if it involved something electrical.   He could “Jerry Rig” anything, which often involved duct tape and wire, but it always worked.  His honest straightforward approach to life will be missed.  Jerry often said his work brought him great joy, but his greatest accomplishment was his family and the memories that were made.   Jerry was a past member of the Detroit Lakes Fire Department, lifetime member of the Knights of Columbus and longtime member of Holy Rosary Catholic Church in Detroit Lakes.

Jerry will be remembered and missed by his wife of 59 years, Myrna of Detroit Lakes, three children:  Randy (Lori) Lorenz of Minnetonka, MN, Sandy (Jay) Kloster of Colorado Springs, CO, and Todd (Lisa) Lorenz of Colorado Springs, CO.  He is also survived by six grandchildren:  Meghan Lorenz (Ben), McKenna Lorenz, Paul (Ashley) Kloster, Laurel Kloster, Nick Lorenz and Corey Lorenz, and one great-granddaughter, McKinley Lorenz.  In addition he is survived by one brother: Francis (Carol) Lorenz of Langdon, ND, one sister: Sharon (George) Johnson of Langdon, ND and one sister-in-law:  Doris Nelson of Albany, OR.

He is preceded in death by his parents, along with his twin sister: Jean Schneider.

To order memorial trees or send flowers to the family in memory of Gerald "Jerry" Lorenz, please visit our flower store.