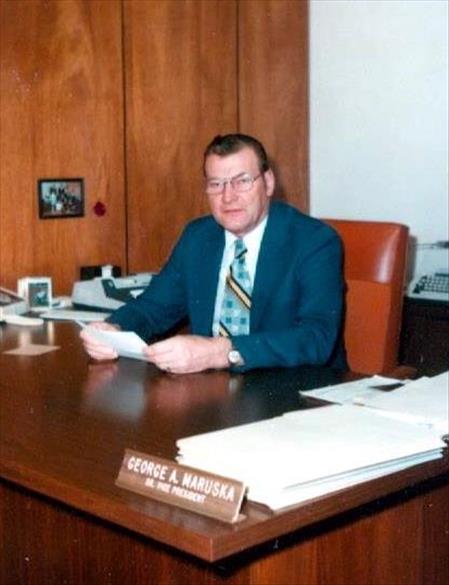 George A. Maruska George A Maruska, age 95, of Detroit Lakes, MN, passed away peacefully, surrounded by his family, on June 15, 2017, at the Emmanuel Nursing Home in Detroit Lakes after a short illness. A Mass of Christian Burial will be held at 11:00 am on Monday, June 19, 2017, at Holy Rosary Catholic Church in Detroit Lakes, MN. A visitation will be held from 4:00 pm to 6:30 pm on Sunday, June 18, 2017, at David-Donehower Funeral Home, with a prayer service at 5:30 pm and followed by the rosary. The interment will follow the Mass at the Holy Rosary Cemetery. George was born on April 15, 1922 in Mahnomen County, Minnesota, the second youngest of seven children. His parents were Frank and Mary (Marek) Maruska and he grew up working on the family farm near Waubun, Minnesota. He attended country school and graduated from Waubun High School in 1938.George enlisted in the United States Army in 1942. He held several enlisted positions rising to the rank of sergeant prior to being commissioned as a 2nd Lieutenant in January, 1945. He was assigned to the Far East Theater of war to be part of the invasion force on the main Japanese island. Prior to that, the war ended and he was stationed on the Philippine Islands. He was honorably discharged from the Army in March, 1946 and returned to Detroit Lakes. George met his wife, Lillian Mertens, while on leave and they were married in July of 1945 after a correspondence courtship. Upon his return from the war, they settled in Detroit Lakes to raise their family. They had eight children. He began working at the Detroit State Bank as an assistant cashier in 1947 and remained with the bank (now Bremer) until his retirement as Senior Vice President in 1984. George was a member of the Minnesota National Guard upon his return from World War II until his retirement as a Major in 1963. He served in various staff positions and served as the commander of the Detroit Lakes National Guard unit when it was activated for the Korean conflict in 1951. He served a tour of duty in Korea with the 45th Infantry Division. George and Lillian were lifelong supporters of Holy Rosary Parish and School. They ensured their children received a catholic education through high school if desired. George served on several committees in the parish. George was also active in community affairs. He served on election committees for various local candidates, on the city utilities commission, on the American Legion oratory committee, and the Minnesota Civil Service Organization. He was a member of the Lions Club, Veterans of Foreign Wars and was a past commander of the American Legion Post. He and his wife also enjoyed card parties and dancing. George was preceded in death by his wife, Lillian; his father and mother, Frank and Mary Maruska; BROTHERS: Frank, Thomas, Joseph, James, and Jerry; SISTER Unnamed (died at birth); GRANDDAUGHTER Kelsey Maruska. He is survived by 3 SONS Wayne (Renee), Dennis (Dale Schmitzer), and George (Laurel); 5 DAUGHTERS Carol (Marvin) Pierce, Catherine (Darryl Salter) Maruska, Louise Ogaard, Mary (James McDougall) Maruska, Gina (Michael) Erickson; 13 GRANDCHILDREN, Christina (Brian) Stonecipher, Travis (Sedruola) Maruska, Tyler, Kyle, and Zachary Maruska, Erika (David) Bishop , Andrew Ogaard, Elizabeth (James) Cochran, Philip Ogaard, Anna (Cody) Brekken , Amanda (Michael) Maruska-Baker, Nicole and Katherine Erickson; 9 GREAT GRANDCHILDREN Canyon, Callie, and Emily Stonecipher, Vladimir and Anastasia Maruska, Lauren and Brooke Bishop, Freya and Finn Brekken, Devyn Cochran, Greyson Baker. In lieu of flowers, the family requests donations to Holy Rosary School - George and Lillian Maruska Endowment Fund or the Emmanuel Foundation - George & Lillian Maruska Scholarship Fund.

To order memorial trees or send flowers to the family in memory of George Maruska, please visit our flower store.