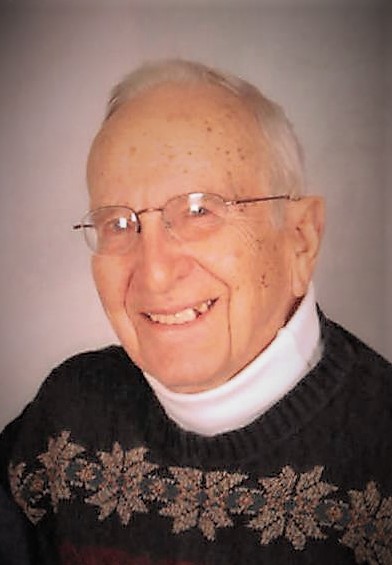 George Anthony Oja was born to parents Anton and Johanna Sulander Syväoja on June 15, 1921, in the Village of Mountain Iron, MN.  His family moved to Ely when he was 8 years old. He attended School in Ely. At the age of 16, he joined a CC Camp and served for 16 months.   He returned to Ely and graduated from High School in 1940.

George continued his education at Ely Junior College for two years. In 1942, he entered the Army and served as a medic for four years, most of which was in the European Theater.  He was discharged in 1946.

He was a member of the Congregational Church of Detroit Lakes. He sang in the church choir for 35 years, taught Sunday School, worked with the Boy Scouts, served on various Boards and took numerous groups of young church people from Minnesota on week long canoe trips into the boundary waters.  After retirement, he volunteered delivering Meals-on-Wheels, taught a 55 Alive Driving classes, served on the Dollars for Scholars Board, volunteered at the Holmes Theater and was a member of various professional organizations, having lifetime membership in Phi Delta Kappa, NEA and the American Legion. George enjoyed canoe trips with his children, trout fishing, camping and gardening.   Hockey and Football were his favorite spectator sports.  He ran the time clock for the DL varsity hockey games for 25 years and DL varsity football games for 58 years.  As an avid crossword fan, he had a great interest in researching words.

George is preceded in death by his parents. He is survived by his wife of 63 years, Sally; a son: Gregory (Beth) Oja of Bemidji, Minnesota; a daughter: Mary (Tom) Wood of Darby, Montana; two granddaughters: Sara (Justin) Bramblett and Kaisa (Jason) Syväoja and two grandsons: Tom Wood V. and Antton Oja.

To order memorial trees or send flowers to the family in memory of George Oja, please visit our flower store.
Open