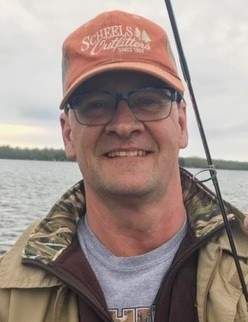 Gary E. Anderson, of Riverdale, North Dakota, died unexpectedly July 24th, 2020. Gary was the son of Maurice and Evelyn (Wyum) Anderson. Gary graduated high school in Eagle Butte, South Dakota in 1975 and then attended North Dakota State University, graduating in 1980 with a bachelor’s degree in history. He met and, in 1980, married his college sweetheart Nita (Naaden) while attending NDSU, and they later made their home in Riverdale, North Dakota, which Gary declared to be a slice of heaven on Earth—even in January.

Gary and Nita raised their four children, Leah, Ryan, Heather, and Jessica in Riverdale. They summered in Minnesota Lakes Country with Gary’s fun-loving mother, who owned Cotton West Resort on Cotton Lake. The resort was a gathering place for his relatives and many of his best memories were made there; he rated it 2nd only to Riverdale.

Gary was a baby whisperer, cell phone killer, and master of the long, awkward hug. He delighted his family with his quiet, witty humor. While other men put food in their lunchboxes, Gary filled his with books...and a side of chicken. He particularly loved to fish and taught his children well. His fishing improved when his four kids finally stopped crossing their lines, letting the fish swallow the hooks, and inadvertently releasing his stringers of walleyes. He later took up hunting on the North Dakota prairie with his dogs. When he wasn’t doing those things, he was reading a book (did we mention he loved books?) and “liking” his children’s posts on Facebook.

Things Gary will not miss:

The one thing Gary will never miss is Jesus Christ, as he is now with Him in heaven.

Gary was preceded in death by his father and mother, and granddaughter, Isla Lunde. Gary is survived by his wife, Nita; daughter Leah (Jonas) Peterson and grandsons Ethan and Lincoln of Henderson, NV; son Ryan (Sarah) Anderson and grandchildren Taylyn, Everly and Ivan of Rochert, MN; Heather (Dotun) Obadina of Minneapolis, MN; and Jessica (Jonathan) Lunde and grandsons Lennox and Graham of West Point, NY.

To order memorial trees or send flowers to the family in memory of Gary Anderson, please visit our flower store.
Open