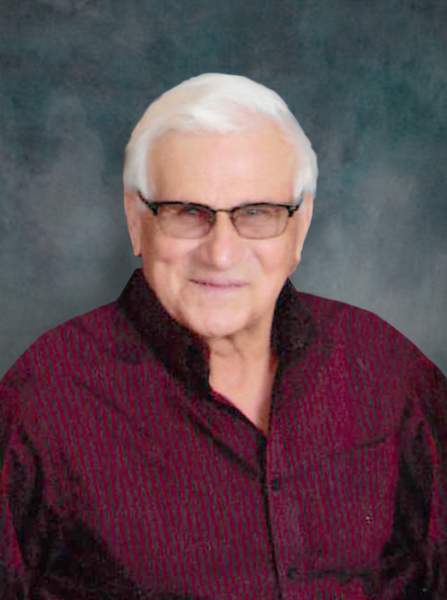 Funeral Services for Eugene will be held Saturday, November 18 at 2pm in Beautiful Savior Lutheran Church, Callaway, MN.  Visitation will be held one hour prior to services.  Interment will be held in Oak Grove Cemetery in Detroit Lakes.

Eugene (Gene) Ambrose Schouviller, known to many as “Jiggs” was born November 15, 1930 in Detroit Lakes, MN to Nicholas and Monica (Zurn) Schouviller.    He attended Callaway Public School through the 8th grade.   Gene started his first job working the potato fields for Callaway Potato Company.   He moved to Moorhead where he worked at Goldberg Stock Farm for one year.   On August 4, 1952, Gene was united in marriage to Ardyce Johnson in Callaway, MN and they settled and made their home in Moorhead.  Gene worked for Armor Stock Yard, R.S. Kvamme Construction and then Advance Structures.   In 1965, Gene purchased the family farm from his father-in-law and moved closer to home.  Along with farming, his working career continued as he drove truck for Foltz Trucking, and construction with Dynamic Homes and Bristlin Construction.  In 1981 the family moved to Detroit Lakes where Gene finished his career working in maintenance with Emmanuel Nursing Home in Detroit Lakes, retiring in May of 1994.

Gene enjoyed retirement; he loved woodworking in his shop, taking care of his yard and watching the traffic go by as he sat on his porch sipping on a hot cup of coffee.   Friends and family always knew that they could stop by for a visit.   Gene was proud of his family and the fact he was able to help care for his grandchildren.  He loved family gatherings and always made sure everyone was included.  He was active with his church, serving as Trustee for eight years and was part of the crew that placed the steeple on Immanuel Lutheran Church in Callaway.  He instilled in his children a strong work ethic, a life centered on Christ and treating everyone with kindness and respect.

He is preceded in death by his parents along with one sister: Isabelle, three brothers:  Leo, Irvin and Vince and father-in-law and mother-in-law:  Louis (Ella) Johnson.

To order memorial trees or send flowers to the family in memory of Eugene Schouviller, please visit our flower store.