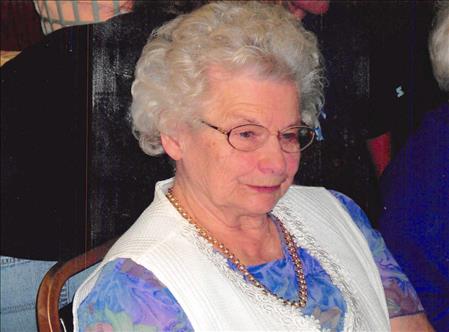 Elizabeth "Betty" Theresa Teiken, age 94, of Ogema, MN, passed away on Thursday, October 6, 2016, at Essentia Health-Oak Crossing Nursing Home in Detroit Lakes. Betty was born on July, 5, 1922, to Henry and Catherine (Brixius) Schreiner in Erie Township. She attended country school at District 26-1, where she attended through the eighth grade. After school, she went to Milwaukee to live with her sister, Liddy, and worked at Pabst Blue Ribbon Brewery during the WWII effort. She met Vernon Teiken on a train coming home, while he was returning from the war; they were united in marriage on November 11, 1946, at St. Joseph's Catholic Church in Milwaukee. In 1947, they moved to Ogema and later into the country, where they farmed until retirement. After the death of her husband, and at the age of 67, she got her driver's license, which she used to deliver meals for the Meals on Wheels program for 15 years. She received a service award from Mahube for her volunteer work. She was active in the Ladies Sodality VFW Auxiliary. She was devout in her faith and active at Most Holy Redeemer. Her greatest role in life was raising all her children and loving her grandchildren and great grandchildren. Betty enjoyed gardening and playing cards with her family and friends. She will be remembered by all for her loving smile and lively spirit. She is survived by her sons: Tom (Janice) Teiken of Ogema, Mark (Phyllis) Teiken of Mahnomen, Carl (Merry) Teiken of Ogema, Alan "Bud" (Theresa) Teiken of Ogema; daughters, Mary (Jim) Mott of Frazee, Jean Beaupre of Fargo, Linda (Lloyd) Jirava of Ogema, Margaret Lefebvre of Callaway, Rita (Brad) Westlund of Lake Park, Judy (Rich) Berger of Waubun; 35 grandchildren; 68 great grandchildren; one great great grandchild; and two sisters, Sister Amy Schreiner of Little Falls, and Rosie Johnson of Burns, OR. She is preceded in death by her husband, Vernon; a daughter, Amy DeGroat, a grandson, Mike Teiken; her parents, Henry and Catherine; three brothers; two sisters; and three son-in-law's, William "Billy" Beaupre, Wally Lefebvre, and Johnny DeGroat.

To order memorial trees or send flowers to the family in memory of Elizabeth Teiken, please visit our flower store.