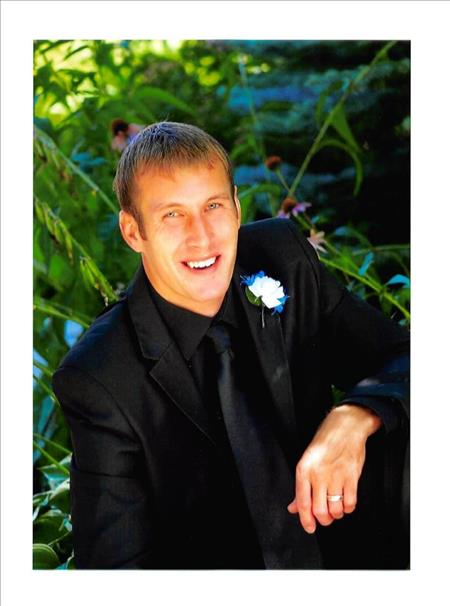 Douglas "Dougie" Miller, age 31, of Detroit Lakes, MN, formerly of Ada, MN, passed away tragically on Monday, September 19, 2016. Memorial service for Doug will be held 9:30 a.m., Saturday, September 24, 2016, at Lakes Area Vineyard Church in Detroit Lakes. A gathering time will be held from 6-8 p.m., Friday, September 23, 2016, at Lakes Area Vineyard Church with a prayer service to take place at 7 p.m. A time of gathering will continue from 8 a.m., until the time of service on Saturday at the church. Burial will be made at 10 a.m. on Sunday, September 25, 2016, at the Ada Municipal Cemetery. Douglas Miller was born August 26, 1985 to Daryl and Joleen Miller. He was born and raised in Ada, MN. Doug was a close friend to many in his community growing up and excelled in the activities that he loved: spending time with his grandpa and dad, playing football, bike and snowmobile racing, weekends at the lake and fishing with his grandma LaVonne. In the spring of 2009, Doug met his perfect match, his wife Teri Miller. They were wed in the summer of 2011 near Detroit Lakes, MN where they have lived for the past five years. Doug's first child, Telyn Miller, was born in 2014 and they are expecting their second child in February of 2017. Doug loved the time he spent with Telyn doing everything from playing dress up and having tea parties, to mowing the lawn together, fishing, going on family hikes, and sledding together in the winter. Evening bath time was also a special time that they shared each day. He was a wonderful husband, father, brother and son. He cared deeply for his family and they for him. Doug was a servant, a salesman, and a friend. In the past few years, Doug and Teri have been very involved in their church. He served his community in many ways and led a youth group where he had an impact on many young members of his church. Doug was a salesmen and agronomist in the agriculture industry for CPS, Legend Seeds, RDO, and, most recently, Thunder Seeds. Doug loved his work and was very good at it. He truly felt that his work had an important impact on feeding the world. His passion for what he did and his devotion to his customers led to many of them becoming close friends. Doug was the epitome of a friend. He could make anyone feel comfortable being themselves and always could always get a laugh. He had a little saying or song for every situation, which made it nearly impossible not to smile when he was around. Doug was a talented man that loved being outdoors and was good at almost everything he tried. He spent much of his time with his friends, clients, and family hunting, golfing, fishing, boating and snowmobiling. He loved to fish and was involved in the organization Fish Addictions where he used his natural ability to entertain in their productions. He spent many hours on the roads, in the fields, and on the lakes of Minnesota and had a deep love for his home state. Doug commonly used the saying "go big or go home". He had a big heart and a big impact on his community and he is now home and at peace with his Savior. He is survived by his wife, Teri Miller, daughter, Telyn Miller, new baby on the way, of Detroit Lakes; Doug's parents: Daryl "Doug" (Joleen) Miller of Ada, MN; sister, Alexis "Lexie" Miller of Ada, MN; grandma, LaVonne Miller of Ada, MN; father and mother-in-law: Byron (Evie) Johner of Brookings, SD; sister and brother-in-law, Lori (Josh) Lindberg of Mesa, AZ; niece, Audrey Lindberg and nephew, Matthew; many aunts, uncles and cousins; and numerous friends. Preceding Doug in death were his great grandparents; grandpa and grandma Beyer; grandpa Miller; and Rick Miller.

To order memorial trees or send flowers to the family in memory of Douglas Miller, please visit our flower store.