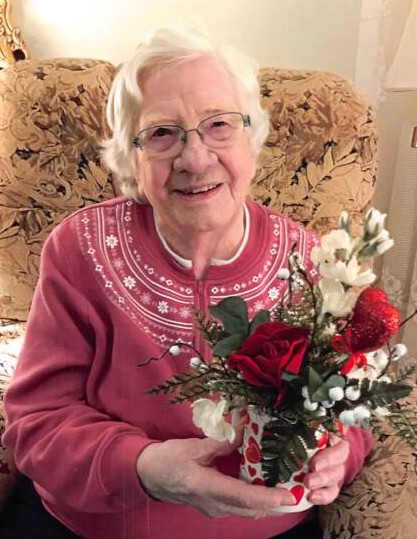 Doris Lorene Weum was born on November 6, 1925 the daughter of Emil and Olga (Nelson) Weum in Flom, MN. She attended Country School and then Waubun High School, until the 11th grade.

Doris was united in marriage to Vincent John Pawlak on July 27, 1944 in White Earth Mission. To this union five children were born; James, Dennis, Diane, Lloyd and Thomas.

She was a homemaker for most of her life but she also worked in many places that she was proud of. She worked for Erie 34 then her and her husband had a garage in Ogema from 1958 to 1970 where she would pump gas for customers. When the family moved to Wahpeton, ND, she worked for Ro-Banks from 1971 to 1979. She opened her own upholstery shop in Ogema, MN, for a few years before working for the Senior Center in Callaway and Ogema as their Event Coordinator until she retired.

Doris was very active with the Homemakers Club in Ogema and the Ladies Auxiliary which was very important to her. Doris loved sewing, playing cards with her friends, bingo, puzzles, and visiting with friends and family. She was a mother all the way and her family was the most important thing to her.

She is greeted in Heaven by her husband John, her parents Emil and Olga, an infant daughter Doris Ann, and her siblings Archie, Eldred, Alice, Delaine, and Hazel.

To order memorial trees or send flowers to the family in memory of Doris Pawlak, please visit our flower store.