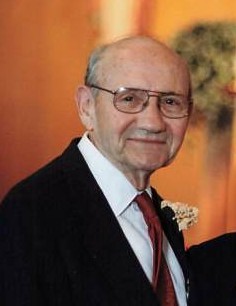 Donald Lefebvre, a devoted husband, father, grandfather, brother, uncle and friend, was born on November 4, 1927 to Emile and Mary Lefebvre on the family farm in rural Callaway, Minn. He was the youngest of 10 children.

On June 23, 1949, Don married Gladys Jasken in Ogema, Minn. Together, they raised six children and were a steadfast pair until Gladys’ passing in 2016. Don was a subtle disciplinarian -- a stern look from behind the newspaper and a wink sufficed -- but he wasn’t shy about his opinions. He built special bonds with each of his 16 grandchildren and 34 great-grandchildren (a 35th due any day), taught them to dance while standing on his feet and played countless games of rummy.

Don was a voracious reader of history and newspapers and had a varied career in farming, livestock hauling, general contracting, and real estate, which he continued into his final years. He never retired. He was an active community member, participating in Knights of Columbus for many years, and was elected several times to the local Soil and Water Conservation Board.

Don was an adventurer at heart. He was an avid sportsman, always with a canine companion, and took several trips West to hunt waterfowl and big game, including a trip with each grandson. On a whim, he joined his granddaughter skydiving on his 81st birthday. He enjoyed trips to Minneapolis and Ft. Myers, Fla. for Twins baseball games and was a fixture at area gun shows. He was proud of the unique collection of historic firearms he amassed.

He is preceded in death by his wife of 67 years, Gladys, son-in-law Gregg Orr, parents Emile and Mary, sisters Ortrude, Antoinette, Ernestine, Mayme and Alice, and brothers James, John and Vince.

Don’s family would like to thank the staff of Emmanuel Nursing Home for the many kindnesses shown to Don over his many visits, including his final stop.

Please click here to view the video tribute
To order memorial trees or send flowers to the family in memory of Donald Lefebvre, please visit our flower store.