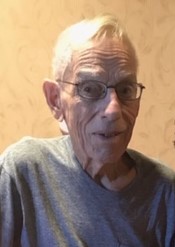 Deane L. Woodard, 87, Detroit Lakes, MN, passed away peacefully on Tuesday, December 18, 2018 at Essentia-Oak Crossing Nursing Center in Detroit Lakes, after a courageous battle with kidney cancer.  A Memorial Service will be held Saturday, January 12 at 2PM in the David-Donehower Funeral Home, Detroit Lakes.  Visitation will be held one hour prior to services.

Deane LeRoy Woodard was born January 12, 1931 in Luce, MN (Becker County) to Loren and Irene (Evey) Woodard.  He attended school and graduated from Pelican Rapids High School in 1948.  He then started working at Marshall Wells Hardware during his school days and after graduation.  Deane then moved to Killeen, TX and worked for McCoy TV for a couple of years before moving back to Pelican Rapids where he sold popcorn on the streets; and was known as the “Woody Wagon.”

Deane loved boats and sailed his sailboat down the Mississippi River to the Gulf of Mexico.   In his later years, Deane helped out at DM Propane in Detroit Lakes.

Deane is survived by his brother Clarence “Bud” (Gloria) Woodard of Bemidji, MN, Sister-in-law:  Mavis Woodard of Grand Forks, ND along with several nieces and nephews and many friends.

Preceding him in death are his parents, sister Doris and brother, Owen “Todd”.

To order memorial trees or send flowers to the family in memory of Deane Woodard, please visit our flower store.