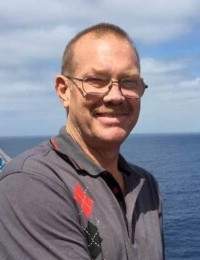 David E. Kramer, 60, Detroit Lakes, MN, died Sunday, September 4, 2022 at his home.  Funeral services will be 1:00 pm, Saturday, September 10 at David-Donehower Funeral Home with a time of gathering 1 hour prior to the service on Saturday.  Interment will be held at a later date in Oak Grove Cemetery.

David Edwin Kramer was born June 18, 1962 in Mahnomen, MN to Edwin and Ruth (Pearson) Kramer.  He is a 1981 graduate of Waubun High School where he was a member of the Waubun Bombers Football Team.  Following his graduation, he began his training as a sheet metal worker, working his way up to Foreman. David also did air conditioner and heating repair in his spare time.   He spent the majority of his working years in Denver, CO and Minneapolis, MNN.  He retired and moved to Detroit Lakes in 2018.  He obtained his CDL and drove truck and also worked as a farm hand.

David enjoyed fishing, hunting, trips to Alaska and Canada and his job as a sheet metal foreman.

To order memorial trees or send flowers to the family in memory of David Kramer, please visit our flower store.

Interment at a later date