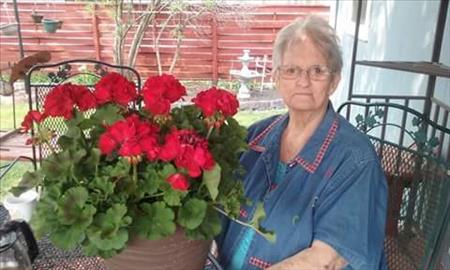 Darlene Marie Stoll, age 79, of Detroit Lakes, MN, passed away on Tuesday, January 24, 2017, surrounded by her loving family at Essentia Health St. Mary's Hospital in Detroit Lakes. A funeral service will be at 2:00 pm on Saturday, January 28, 2017, at the First Baptist Church in Detroit Lakes, Pastor Jack Hanks officiating, with a time of gathering one hour prior to the service. A visitation will be from 5:00 pm to 7:00 pm on Friday, January 27, 2017, at David Donehower Funeral Home in Detroit Lakes, with a prayer service at 6:45 pm. Darlene was born on February 14, 1937, to John "Jack" and Marie (Dodd) Manning in Frazee, MN. She grew up near Strawberry Lake and attended the Strawberry Lake Mennonite Church. She graduated from Detroit Lakes High School in 1956. Darlene was united in marriage to Warren Stoll on September 6, 1957, in Sault Ste. Marie, MI. The couple settled north of Frazee where they raised their family. In 1992 they moved to Detroit Lakes. Darlene was a faithful member of the First Baptist Church in Frazee and then First Baptist Church in Detroit Lakes. She was an active member of the Lady Bird Homemaker's Group for over 50 years. Darlene enjoyed giving of her time and her love of cooking to the ministry of The Refuge. Darlene was a devoted mother who loved raising her children. She cared not only for her own children but also for her extended family. Darlene enjoyed baking, cooking, and the company of family and friends. The combination of these meant smiling faces around her dinner table. Darlene loved the Lord and served faithfully throughout her life. She is survived by her husband of 59 years, Warren Stoll; children, Victoria (Les) Taves of Detroit Lakes, Scott (Linda) Stoll of Warroad, Tim Stoll of Fargo, ND, and Lynn (Todd) Taves of Warroad; sisters, Donna Thompson of Ogema, Beverly Stoll of Detroit Lakes, and Kathy (Roy) Mortenson of Detroit Lakes; a brother, Mel (Shirley) Manning of Detroit Lakes; 12 grandchildren; four great-grandchildren with two on the way; and many nieces and nephews. She is preceded in death by her parents, Jack and Marie Manning; a brother, John Manning; a sister, JoAnn Mortenson; a grandson, Johnny Stoll, and a son in law, Jeff Baker.

A time of gathering begins one hour prior

To order memorial trees or send flowers to the family in memory of Darlene Stoll, please visit our flower store.