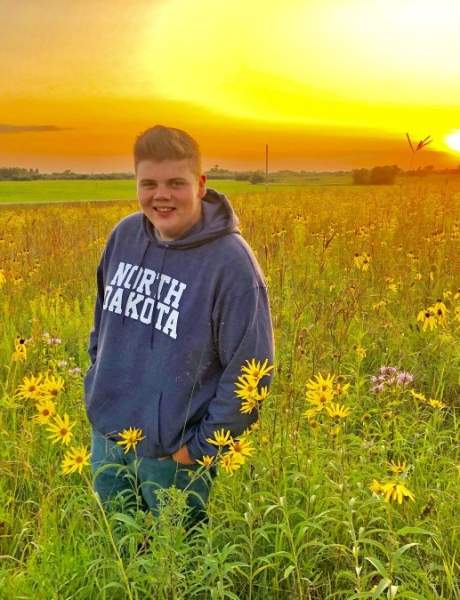 Not so long ago in a galaxy far, far away... Clayton James Lehrke lived a unique and amazing life.  As if proving he was the firecracker that he was, it was appropriate he was born on the 4th of July 2001 in Fargo, ND.

Clayton lived with autism and was exceptionally intelligent. At a very young age he could explain in vivid detail the differences in F1 through F5 tornados, the complete history of the Godzilla movies, or the release dates of any film.

He brought so much laughter to those whom were lucky enough to know him. He was well known for his inappropriate jokes at inappropriate times.

He spent this last summer ranching in North Dakota with his cousin Cody. Although having the time of his life, he quickly discovered the cowboy lifestyle may not be for him.

He recently passed his driver’s test, fulfilling his dream of driving to school independently, “Because seniors don’t ride the bus.” He took it upon himself that the ‘04 hand-me-down Buick was now his, spiffed it up from top to bottom, and drove it with pride (At 30 mph top speed).

He enjoyed fishing, family gatherings, and fighting with his brother and sisters.

He was preceded in death by his Grandfather James Lehrke. He is survived by his parents Timothy and Angie Lehrke; his siblings Annalise, Weston, and Wren Lehrke; Grandparents Bonnie Lehrke (Art Yliniemi), Darlene and Curtis Ballard; and numerous aunts, uncles, and cousins.

He taught us all how to love in a whole new way.  He was his Mama’s boy and his Dad’s world.  He loved his siblings and idolized his Uncle John, Cousin Cody and Grandpa Curt. Clayton will be dearly missed by all those who were lucky enough to know him and being the mannerly person, he was, he’d want to let everyone know, “Thanks, I appreciate it.”

Please click here to view the video tribute
To order memorial trees or send flowers to the family in memory of Clayton Lehrke, please visit our flower store.