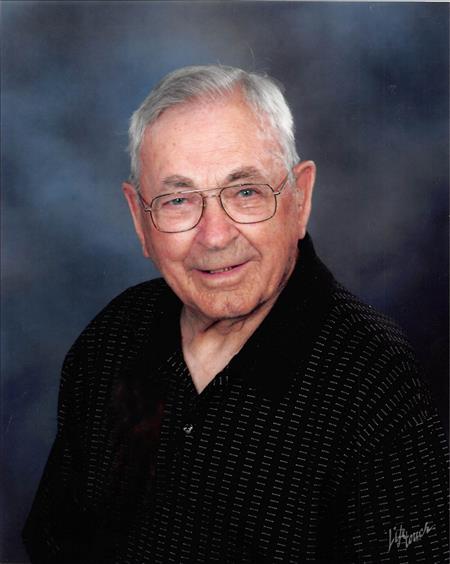 Services are set for longtime local resident Carl Jens Knutson of Detroit Lakes, who died on Sunday, February 26, 2017, at the age of 100 years old. The funeral service will be at 2:00 p.m. on Saturday, March 4th, 2017 at David-Donehower Funeral Home Detroit Lakes. Burial will be at Oak Grove Cemetery following the funeral. Visitation will be on Friday, March 3rd, from 4:00 to 6:00 p.m. at David-Donehower Funeral Home. Carl Jens Knutson was born to Erik and Christine Knutson on May 5, 1916 in Lake Park, Minn. He attended public school but had to leave after 8th grade to support his mother, 2 brothers and 2 sisters during tough times. Carl was drafted in the US Army at 25 years old, 6 months before Pearl Harbor was attacked, and served during World War II, from 6/16/41 – 11/2/45. He saw action in New Guinea and Luzon, and risked his life more than once to save fellow wounded soldiers. He was a proud recipient of the Purple Heart, Bronze Star, CIB, Asiatic Pacific Theater Medal, American Defense Service Medal, Philippine Liberation Ribbon, and 4 Overseas Service Bars. Upon his return to Detroit Lakes, he married Edna Palma Marie Cincush, of Audubon, MN on June 8, 1946. At that time he worked at the "smallest gas station in the world" in Detroit Lakes, and in 1949 he went into business with his brother Morris, and operated Knutson Brothers Texaco service station for 19 years. In 1968 they bought the Union 76 service station, and owned that for 10 years. The next 6 years, before they retired, Carl and Morris operated Knutson Car Repair, and finally retired from the business in 1984. Edna and Morris's wife, Birdie, did the accounting part of all the businesses they owned. Carl and Edna raised a family of three girls: Shila, Carla, and Palma. After retirement he took up golf for a while, but his great enjoyment came from fishing and hunting. He was a loyal fan of the Minnesota Twins and the Minnesota Vikings, and listened to the local Lakers football games on the radio, and was very proud of their record. Until he couldn't drive his car any more, he was a regular at the American Legion every morning for breakfast, sitting with the "regulars". He not only had his favorite table, but he also had his favorite chair at that table. The waitresses knew what he was going to order, and that Carl liked his coffee hot! A recent highlight for Carl was on May 7, 2016 when he celebrated his 100th birthday, with his family and friends! A big party was held at the Speak Easy in Detroit Lakes, attended by many people who have known him for years through his businesses. He couldn't get over how many people came to his birthday party! Surviving Carl are two daughters, Shila Knutson Worden (Roger) of Lenexa, Kansas; and Palma Knutson Wright (Fred) of Moorhead, Minn. and seven grandchildren: Traci Thomas, Justin Wright, Travis Worden, Troy Worden, Brandon Biermaier, Alysson Biermaier and Blake Biermaie along with six great-grandchildren: Hayden Worden, Maxwell Worden, Olivia Worden, Carly Worden, Avery Worden and Olivia Boyd. Preceding Carl in death were his wife, Edna (12/26/1995), daughter Carla Knutson Biermaier (5/24/2014) and parents Erik Knutson and Christine Knutson Fagerberg, brother Morris and his wife Birdie, brother Custer and his wife Evie, sisters Mabel Murray and Alice Anderson.

To order memorial trees or send flowers to the family in memory of Carl Knutson, please visit our flower store.