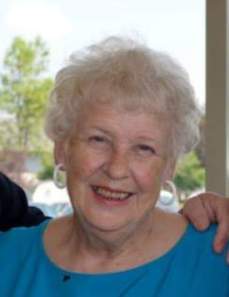 Beverly Jean Squires was born on March 15, 1936 in Moorhead, MN to Jareld and Audrey (Olson) Squires. She graduated from Detroit Lakes High School in 1954, after which she attended business college. On July 20, 1957, Beverly was united in marriage to Jerome Leitheiser and to this union three children were born, Daniel, Robert, and Colleen. They moved to many different places in the United States and Germany with the US Army until returning to Detroit Lakes in 1979.

On August 22, 1987, Beverly was united in marriage to James Runger and welcomed his two sons, Thomas and John, into her family. Beverly lived in Detroit lakes until she moved to Casselton North Dakota in 2005 to be nearer to Robert’s family. She remained in Cassleton, living with her daughter until her death.

Beverly worked as an office secretary for the US Army for many years before becoming a counselor for the Women, Infants and Children Program in Minnesota for over 20 years. After retiring, she kept herself busy by helping her daughter with her cleaning business until 2014.

Beverly enjoyed painting figurines, crocheting, knitting, gardening, being outside, fishing with family, taking car rides down country roads around Detroit Lakes, singing to Johnny Cash, and dancing to Elvis Presley. She treasured listening to the Bible, going to a prayer groups, and attending services at First Assembly in South Fargo. Beverly loved her dog Maggie, who passed away in October 2019. Spending time with her family, especially her grandchildren,  was very important to Beverly. She also loved to visit her siblings and many friends.

It was Beverly’s love that bonded all her family together. She will be forever treasured by her children and grandchildren Daniel (Carla) Leitheiser, Cariel Leitheiser, Aaron Leitheiser, and Bradley Leitheiser; Robert (Loree) Leitheiser, Scott Leitheiser and Karina Leitheiser; Colleen Leitheiser,Carlee Juve and Nicholas Leitheiser all of Casselton ND; her ex-husband James Runger,Thomas and John Runger of Minnesota; and her sister Judy (Donald) Schatz of Fargo ND

Preceding Beverly in death were her parents; her siblings Wayne Squires, Jareldine Kjono, and LeRoy Squires; her ex-husband Jerome Leitheiser, and her granddaughter Andrea Leitheiser.

To order memorial trees or send flowers to the family in memory of Beverly Runger, please visit our flower store.
Open