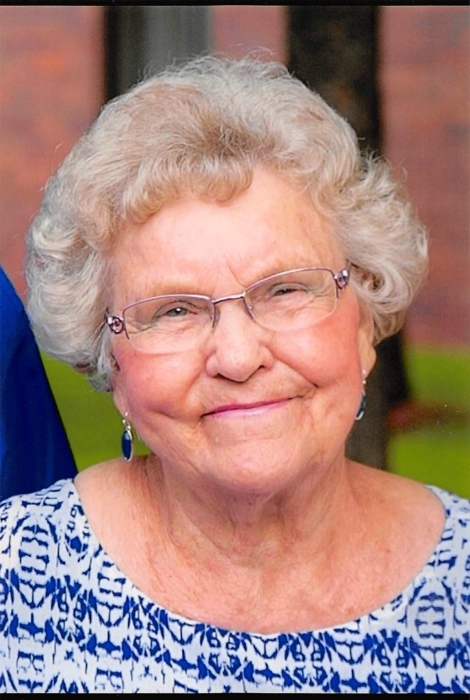 Betty Lou Sampson was born October 27th, 1938, at her rural family farm in Finley, ND, to Redwin and Gertrude (Larson) Sampson.  Betty attended school in Blabon, ND, prior to moving with her family to Callaway, MN, in 1947. Betty graduated from Detroit Lakes High School with the class of 1957.

Betty met the love of her life, Nicholas Schouviller, at a rural dance. While dating, Betty moved to Fargo, ND, and soon after, Nicholas went into the service. She worked for St. Luke’s Hospital as a Nurses’ Aid and for American Linen. When Nicholas returned from the service, they were united in marriage at Assumption Catholic Church, in Callaway, MN. on June 14th, 1958,

After getting married, Betty and Nicholas purchased the Zurn family farm.  Betty enjoyed life on the farm and worked alongside Nicholas doing whatever work needed to be done. She loved the outdoors and tended large flower and vegetable gardens. She was a great cook and enjoyed preparing meals for her family.  In 2012 the Schouviller farm was acknowledged as a Century Old Farm.

Betty’s greatest joy was being with her large family.  She loved having family gatherings at the farm, and going to the grandchildren’s activities. She loved each and every child and wanted to make every child feel special. She was truly the happiest when surrounded by her family.

Betty enjoyed going to lunch with her friends, shopping, tending to her flowers and getting her hair fixed at Magnolia’s.

To order memorial trees or send flowers to the family in memory of Betty Schouviller, please visit our flower store.
Open