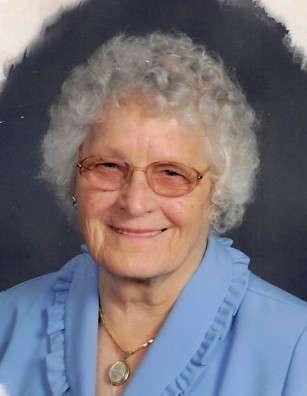 Mass of Christian Burial will be held Saturday, December 16 at 10AM in Most Holy Redeemer Catholic Church, Ogema, MN.  Visitation will be held Friday, December 15 at David Donehower Funeral Home from 5pm-7pm with a 6:30pm Rosary Service followed by a Prayer Service at 7pm.  Interment will be held in Calvary Cemetery, White Earth.

Beatrice Mary Dalve was born on November 27, 1925 to Delbert and Julia (Dobmeier) Dalve. As a young girl she lived in the Callaway area with her family and then on a farm near Ogema, MN. She married Anthony Mertens, (Tuny) on June 11, 1946, in White Earth, MN.  They lived most of their life in the Ogema area, on a dairy farm, except for a few years when they moved to Oregon. They later purchased the Dalve farm where they lived the remaining years.  They had twelve children.   Anthony died on July 25, 2007. Beatrice stayed on the farm until the summer of 2017 when she moved into Detroit Lakes because of health problems. She was at the Lamplighter apartments from July to November. Beatrice’s favorite colors were pink and purple. She loved playing the drums in their music band in later years with Tuny’s Band for dances and nursing homes. She also enjoyed playing cards, embroidering, crocheting, fishing and family gatherings. She made quilts for her children, every grandchild and for many great-grandchildren. She loved attending birthday parties, weddings and baptisms in the family. One of her specialties was her garlic dill pickles and everyone enjoyed her chocolate chip cookies and home-made bread. She was very active in her church and served as an Extraordinary Eucharistic Minister, Lector and took care of the altar cloths. She will always be remembered for her giving spirit.

Beatrice is survived by her children; David and Gerry (Jasken) Mertens of Zapata, TX, Karen and Michael Splonskowski of Lake Park, MN, Paul and Sandra (Heisler) Mertens of Ogema, Susan and Keith Johnson of Ogema. Dean and Shelly (Hoeft) Mertens of Ogema, Betty and Gene Barnes of Valley, NE, Della and Scott Abrams of Commerce City, Co. Anthony JR. and Rhoda (Derstine) Mertens of Ogema; 34 grandchildren and 90+ great-grandchildren; one sister; Elaine Zima of Waubun , MN; one brother; Maynard Dalve of Great Falls, MT. She was preceded in death by her parents, her husband Anthony (Tuny), four sons, Steven, Mark, Jimmy and Danny Jo; one grandson, D.J. Mertens; one great granddaughter, Gabriella along with one sister, Lois and one brother, Delbert.

To order memorial trees or send flowers to the family in memory of Beatrice Mertens, please visit our flower store.