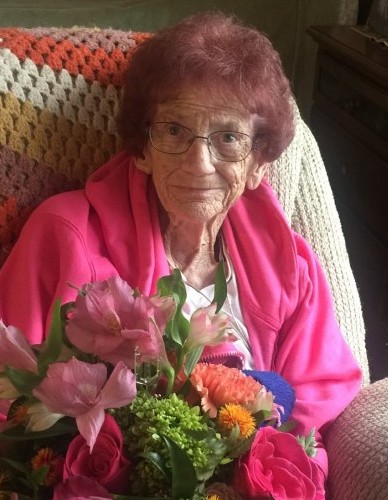 Funeral Services for Arvilla will be held Saturday, November 10 at 11:30AM in David Donehower Funeral Home.  Visitation will be held one hour prior to services.  Interment will be held in Lakeside Cemetery, Frazee.

Arvilla Jean Lewis was born January 15, 1937 in Arnold, Nebraska to Cecil and Vayle (Haswell) Lewis.  She attended school in Arnold, NE graduating from Arnold High School with the class of 1955.   Following high school Arvilla moved to Denver, CO.  At a local roller skating rink she met her future husband, Neil Boutiette as he was stationed with the Air Force.  Arvilla and Neil were united in marriage on June 1, 1957.  They lived in various states as Neil fulfilled his obligation to the Air Force and in 1966, they moved back to Minnesota.  Arvilla was a wonderful homemaker staying busy raising their five children.  Her home was always neat as a button.   As a family they made their best memories at the family lake cabin on Trowbridge Lake near Vergas, MN where grandparents, aunts, uncles and cousins all met.   During Arvilla’s younger years she enjoyed raising horses and helping her Dad on the farm and always had a special place in heart for her “furbabies”.    She enjoyed playing bingo with her VFW bingo friends, along with watching her TV shows “Criminal Minds” and the “Weather Channel”.   She loved getting together with her family, especially watching her grandchildren welcome families of their own.   On November 3, 2011, Neil passed away.  Arvilla continued living at the home she and Neil purchases in 2004 until recently moving into assisted living.  Arvilla was a devoted wife, mother and grandmother and will be missed by her family and fur baby, “Baby”.

She is preceded in death by her parents, her husband Neil (2011), one sister:  Phyllis Lewis and faithful fur babies, “Molly” and “Lily”.

To order memorial trees or send flowers to the family in memory of Arvilla Boutiette, please visit our flower store.