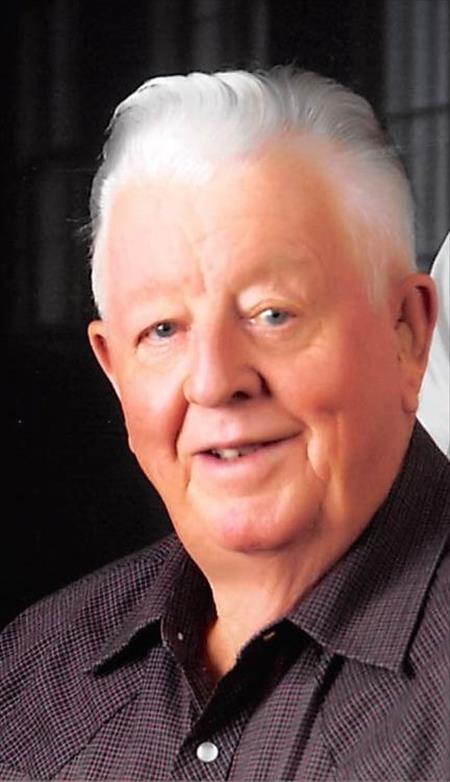 Arnold “Barney” Barnhart, 88, a longtime resident of Detroit Lakes, MN, died on Sunday, June 25th, 2017 at Penrose Hospital in Colorado Springs, CO, less than three months after his wife passed away. A memorial service will be held at the David-Donehower Funeral Home on Tuesday, July 25th at 12:30 pm CT.

Barney was born September 1, 1928 in Estherville, Iowa to Charles and Anna (Traefold) Barnhart. When he was a young child, his family moved to the Mora, MN area where he grew up and attended school. At age 16, towards the end of World War II, Barney left home for the shipyards of Duluth, where he enrolled in vocational school to become a welder and ironworker. His career as a member of the Ironworkers Union took him to Montana, North Dakota, Wisconsin, Ohio, Iowa, Illinois, Louisiana, Alaska, and many cities throughout Minnesota. His jobs varied from retrofitting coal tanks into oil tanks for the railroads to building commercial grain bins along the Mississippi to building high rises and skyscrapers to working on the Hubert H. Humphrey Metrodome and the Trans-Alaska pipeline. Deciding on a career change for a while, Barney bought a big-rig semi-truck and drove routes throughout the eastern United States. While on a route in Ohio, he met Verlie "Lee" Goodman, whom he later married on September 26, 1952 in Minneapolis, MN. Shortly after the birth of their second child, Barney quit driving to continue his career as an ironworker, which took the family to several Midwestern states.

After purchasing the old Buffalo Lake Tavern in April 1967, Barney moved his family to the Detroit Lakes, MN area. Here, Barney wore several hats: He and Lee owned and operated the Buffalo Lake Tavern & Campground for almost ten years; they also purchased a farm in the spring of 1973 and raised cattle, alfalfa, and small grains; and Barney continued welding and ironwork throughout his entire career. After living on-site by the Buffalo Lake Tavern, Barney and Lee moved to a house on the farm, then to Big Pine Lake for a handful of years, and then they settled at their place on Rice Lake about 23 years ago. Finally, having lost his wife this past April, Barney moved to Rye, Colorado to live with his daughter just a few weeks before his death. From elk hunting in Montana with his son and grandsons to deer camp with friends in Middle River, Minnesota to elk hunting in Colorado with friends and family, Barney spent weeks each year hunting. He also enjoyed fishing extensively and traveling with his wife and his daughter. He absolutely loved his grandchildren and never missed a graduation or wedding. He was also able to share many birthdays and holidays with them. He really enjoyed working in his yard and maintained a huge veggie garden and raspberry bushes. He never quit welding, even in retirement, making trailers and fish houses, doing repairs, building fence railing, and creating ornamental art. If you couldn’t find Barney in the house or the yard, you could definitely find him in his shop. Barney also loved his pets over the years, especially Dusty 2. Once his wife, Lee (who struggled with Alzheimer’s), went to the memory unit at the nursing home, Dusty 2 was Barney’s constant and loyal companion. Barney is survived by his daughter, Debbie “Barnie” Burnside (Gil Montoya) of Rye, CO; granddaughter, Amy Burnside of San Diego, CA; grandson, Zach Burnside and great-granddaughter, Mazie Coy of Denver, CO; son, David Barnhart (Terry) of Belgrade, MT; grandson, Jonathan Barnhart (Kaysie) and great-granddaughter, Jacqueline of Richey, MT; grandson, Micah Barnhart (Rachael) of Moscow, Idaho; granddaughter, Kathryn G. “Kate” Barnhart of Santa Barbara, CA; the “other” daughter, Rita Haverkamp (Dennis) of Detroit Lakes, MN; and numerous nieces, nephews, and cousins. Barney is preceded in death by his wife of 65 years, Verlie “Lee” Barnhart; son, Carl Barnhart; father, Charles Barnhart; mother, Anna (Traefold) Barnhart; brothers, Lester and Clarence "Bud" Barnhart; nieces, Eileen and Dottie Ann; and nephew, Willie. In lieu of flowers, memorials may be sent to The Marshmallow Foundation (1478 Mallard Street, Detroit Lakes, MN 56501). This is the organization that found a good home for Dusty 2 when Grandpa could no longer care for her. Donations in Barney’s name may also be made to the Rocky Mountain Elk Foundation (5705 Grant Creek Road, Missoula, MT 59808).

To order memorial trees or send flowers to the family in memory of Arnold Barnhart, please visit our flower store.