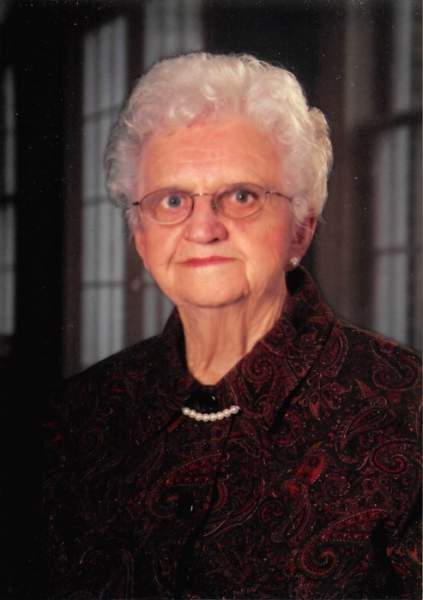 Visitation will be from 5-7 pm, with a prayer service at 7pm Thursday, February 28 at the David-Donehower Funeral Home in Detroit Lakes. Visitation will continue from 10-11am followed by the Mass of Christian Burial at 11:00am Friday, March 1, at the Assumption Catholic Church in Callaway, MN. Interment will be in the spring.

Arleen Ruth Hawthorne was born on Christmas Day 1922 in a farmhouse near Alpha, MN, to Harry and Clara (Lehmann) Hawthorne.  When she was a small child, her family moved to Elysian, MN, where she attended school and grew to womanhood.  She was a tomboy, playing shortstop on a girls’ softball team, spending hours swimming, roller skating, spending teenage summers with her dad hauling milk and cream cans to the creamery from area farms.

She met the love of her life, Raymond Faltersack, when she was 13 when they would attend outdoor movies together.  When she was 17, they ran away in a borrowed vehicle and were married on Oct. 21, 1940, in Estherville, Iowa.  After their marriage they farmed with Ray’s parents in the Elysian area. When the farm was sold in 1948, they drove “up north” to find a farm of their own.  They stopped at the Cozy Coach store in Westbury while searching for a farm and ended up buying the store which Arleen managed until they sold it in 1967.  At that time they built a home on Cozy Cove Road near Floyd Lake.  Raymond died in 1996 and Arleen continued living there until the fall of 2007 when she moved to Silver Birch Apartments in Detroit Lakes.

Ray and Arleen enjoyed many activities together: travelling all over the US, fishing, hunting & camping in several states, and spending many winters in Texas.  A good shot, she bagged her share of deer & caught as many fish as anyone else.  With abundant wild game they brought home, she became an excellent preparer of deer, antelope, fish, duck, geese, pheasant, turtle, etc.

Her family will always cherish her beautiful quilts and afghans which she made until her failing eyesight and arthritic hands prevented her from continuing.  She also enjoyed gardening in the summer and watching the MN Twins.  Her family will always miss her chocolate-covered cherries at Christmas.

To order memorial trees or send flowers to the family in memory of Arleen Faltersack, please visit our flower store.
Open